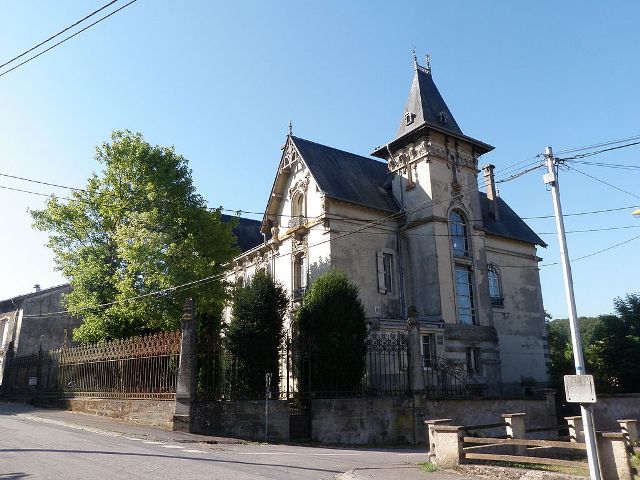 Location: Ville-sur-Illon, in the Vosges departement of France (Lorraine Region).
Built: 1904.
Condition: In good condition.
Ownership / Access: Private property.
Notes: Château Lobstein is a castle of the town of Ville-sur-Illon the Vosges department in Lorraine. Lobstein The castle is named after its original owner, Jacques Lobstein (1847- † 1931), son Cooper, born in Brumath in Alsace. He leaves his region after the annexation of Alsace-Lorraine in 1871 by the German Empire. It is then committed to the "Brasserie de la Cense" in Xertigny as brewer boy where he learned the craft, and then becomes the owner of the "Brasserie de L'Host" in Ville-sur-Illon in 1877, renowned for the purity of its water is essential for the production of beer. The first beer manufacturing in the village dated back to 1627. The newly acquired brewery was proving too small to convert to industrial brewing, it creates "Great Brewery & Malthouse Vosgienne" in 18874, to produce beer and malt with industrially new techniques (production stopped in 1956 for beer, malt 1966 and 1975 for carbonated drinks). In 1904, Jacques Lobstein built a mansion near the brewery, on plans by the departmental architect François Clasquin. In 1931, his son René Lobstein inherited the brewery and the castle until his death in 1964. It was listed as historical monuments June 29, 1993.