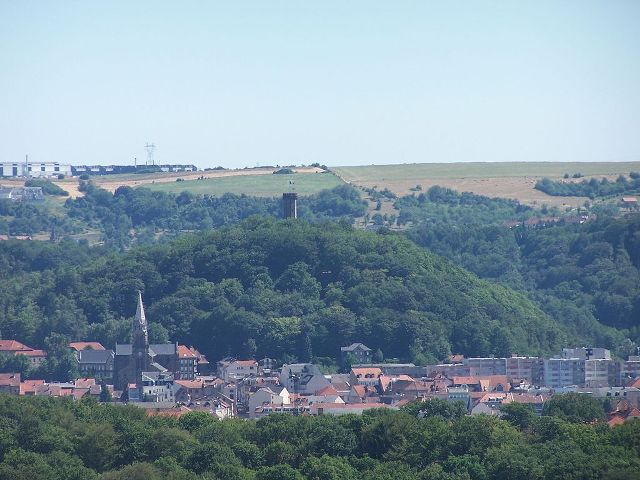 Location: Forbach, in the Moselle departement of France (Lorraine Region).
Built: 11th-12th century.
Condition: Ruins.
Ownership / Access: --
Notes: Château du Schlossberg is located in the French town of Forbach, in eastern Moselle. It is also the name of the hill where it was built, transformed today the outlier on which stands the tower of the same name is located in front of Gaubiving tray, advanced element of the Lorraine plateau. Called green hill, it overlooks the city of Forbach but also the buttonhole of Warndt and the main lines of communication between Metz and German cities. The castle was erected on the site overlooking the ancient road from Metz to Worms, perhaps as early as the eleventh century or twelfth century. But it is mentioned for the first time in texts of Thédoric de Werde in 1257. architectural elements leading historian Max Besler1 to locate its construction in the late twelfth century or early thirteenth century, the last assumption being that adopted by Henri Wilmin. At the time of Thédoric Werde the middle of the thirteenth century, the castle included a palace surrounded by a wall and at the heart of which was a square keep. The entrance was through what later became the fourth gate. It was fortified and enlarged by Arnold VI of Sierck, old. It had become the confidant of the Duke of Lorraine René of Anjou after Bulgnéville battle in 1431 for the protection of northeastern duchy steps. Came into the castle, he improved the protection by extending the enclosure and the establishment of a new door (3rd current door) and the construction of a tower on the site of the present tower . He also built the stables. The lords of Hohenfels Reipoltskirchen and those of Daun Falkenstein turned into the fortified palace of the Renaissance to the mid-sixteenth century. They raised a corner tower and a bastion. This did not prevent the looting of the castle by the troops of Christian I of Anhalt-Bernburg rescue came Henri IV against the Duke of Lorraine Charles III during the difficult succession to the throne of France in 1591. The Counts of Leiningen Westerburg Eberstein and the rose and added additional fortifications there in 1607 with the construction of a new bastion. The castle then included at least six rounds as revealed by the excavations of the nineteenth century. It was razed December 14, 1634 during the Thirty Years War. King Louis XIII through the Marshal Force ordered its destruction in connection with the demolition of a series of castles he saw as a threat to the presence of France in Lorraine. Early 1635 there remained the castle ruins and the hill took its aspect of green nipple. At the time of the Revolution remaining stones were used for other purposes after the transfer of the hill became Mountain Brotherhood Peter Ney. The site then passed into the hands of various families before being bought by Gustave Adt, important local industry that began there historical excavations.

How To Get To Château du Schlossberg (Forbach) (Map):