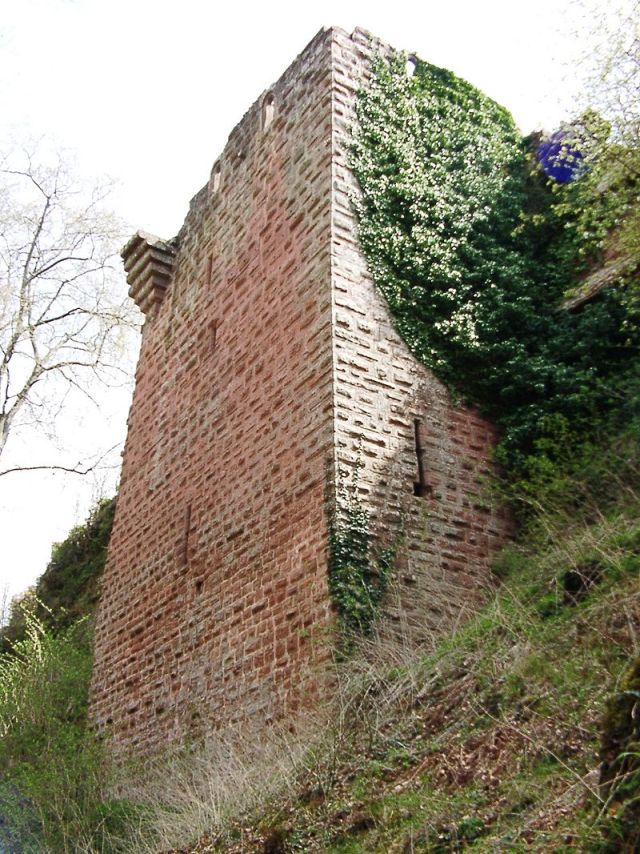 Location: Philippsbourg, in the Moselle departement of France (Lorraine Region).
Built: 1246-1250.
Condition: Ruins.
Ownership / Access: State property.
ISMH Reference Number: PA00106970
Notes: Château du Falkenstein is located in the French town of Philippsburg and the Moselle department, in the heart of the North Vosges. This semi-troglodyte castle dominates the Zinsel Valley.The castle, built by Count Pierre de Lutzelbourg, is mentioned for the first time in 1127. It is intended to protect the possessions of Count located in the Holy Forest of Haguenau. In 1150, Renaud, son of Pierre, died without leaving offspring. The castle was shared between Folmar Sarrewerden and Hohenstaufen family. Jacques Falkenstein appears as a witness in a charter signed in Haguenau in 1205 and in 1316, Gottfried, Conrad, Heinrich and Jacob Falkenstein swear peace with the city of Strasbourg. A feudal peace was signed in 1335, defining the castle into three parts by means of transverse walls. In 1419, John Finstingen (Fénétrange) says lord of Falkenstein as usufructuary from the Sarrewerden; in 1474 held a pariage agreement between Falkenstein: no part should not be transferred, even to another family member without the agreement of other pariers. The castle returned to the counts of Deux-Ponts-Bitche in 1479 and in 1482-1483 conflict erupts for non-compliance with the agreement between the family members. The Falkenstein are only masters of the castle in 1515 and modernization begun by Balthasar is continued by his son. In 1564, Philip IV (1538-1590), Count of Hanau-Lichtenberg, bought the castle for children and grandchildren of Balthasar and a few months later, it will be completely destroyed by fire and never rebuilt.