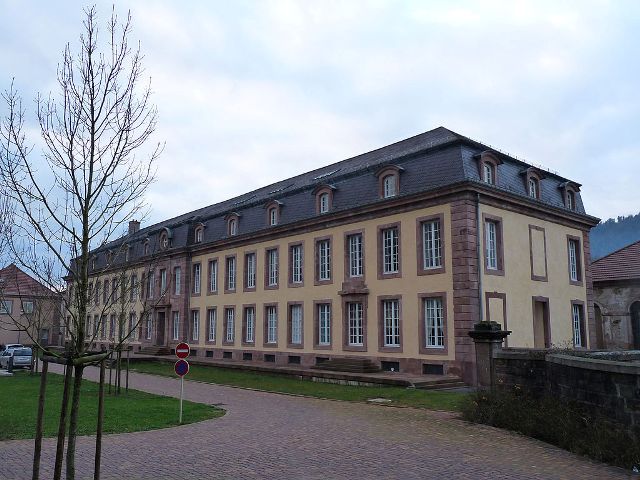 Location: Senones, in the Vosges departement of France (Lorraine Region).
Built: 18th century.
Condition: In good condition.
Ownership / Access: Owned by the Town.
ISMH Reference Number: PA00107340
Notes: Château des princes de Salm-Salm are located in the municipality of Senones northeast of Vosges in the Lorraine region. After graduating in 1751 redefining his principality of Salm-Salm, the Prince Leopold Nicolas-built in 1754 its first castle in the new capital city of Senones. It has a U-shape with two wings on each side mansard roofs. The main facade (west side) and two parallel pavilions are on the side of the city, opposite the St. Peter's Abbey Senones (current Clemenceau square), and the back cover (side) decorated with two parallel common arches (place Charles Thumann current). The second castle was built between 1773 and 1778. It is located north of a large square (place Charles Thumann current) which was extended by French gardens (now replaced by the music school and two ponds). south side of the square was the carousel horses. This second castle allows the original castle to occupy a key place in the urban plan of the city of the eighteenth century, when drilling in 1781 in the middle a cart path and putting it at the center of an axis from the abbey the second castle. With the French Revolution, the Prince Constantine Alexander scans with concern the disruption caused to its larger neighbor. The failure of the flight of the French royal family at Varennes-en-Argonne June 21, 1791, the ruler decided to retire permanently August 15, 1791 to earn his castle Anholt in Westphalia. The First French Republic then annex outright the principality of Salm-Salm March 2, 1793. The first castle undergoes redevelopment in the early nineteenth century. In 1894, a fire destroyed the first mansard roof, quickly replaced by a pavilion roof. But one hundred years later, in 1994, a second fire removes the entire roof and most of the floors. Classified as historical monuments December 18, 1997 (walkway, elevation, roof), the building remains today gutted, open to the elements. A study was conducted by Pierre-Yves Caillault, chief architect of historical monuments, which features dining in its state before the first fire, complete with an interior design study in senior housing. The castle is now private property. The second castle was sold as national property in 1799 and turned into spinning in 1821. He was then the mechanics of learning center Manufactures of Senones. It is classified as historical monuments May 19, 1994 (facades, roofs, stairs with his cage and wrought iron railing). Owned by the municipality, it was renovated and now hosts housing.

How To Get To Château des princes de Salm-Salm (Map):