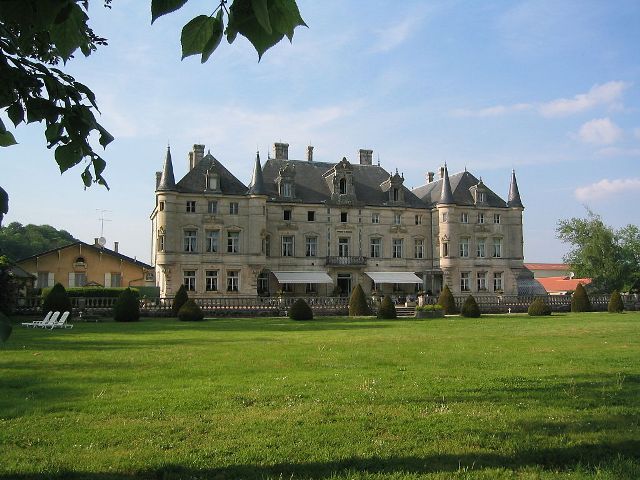 Location: Les Monthairons, in the Meuse departement of France (Lorraine Region).
Built: 1857-1859.
Condition: In good condition.
Ownership / Access: Owned by a private company.
ISMH Reference Number: PA55000003
Notes: Château des Monthairons is located in the town of Monthairons in the department of Meuse and the region Alsace-Lorraine-Champagne-Ardenne in France.It was built in 1857-1859 by Charles-Henri of the Court on the location of the former stately home that the family owned since 1685 by staffing following the marriage of Marie Nicolas Henry Court, Lord of Villiers before DUN (high noble lineage) family from Burgundy and one younger branch came to settle in Lorraine in 1477, after the death of Charles the Bold. This family gave a general engineering: Nicolas of the Court, and a famous Prieur, great reformer of the Benedictine order: domdidier Court born in 1550 in Montzéville near Charny, between 17 years to Abbaye de Sainte-Vanne in Verdun, then studied at the University of Pont-à-Mousson. Prior become cloistered in Saint-Vanne, he began in 1600 to apply the full rigor the original rule and liaises with the Monastery of Saint-Hydulphe to Moyenmoutier. He died in the odor of Sanctity at the age of 73 and was beatified. In 1811, his body was transferred to the family chapel adjoining the castle. Originally, the area stretched over 225 ha of land and meadows, two farms were located there. The family of the Court was also owner of 195 ha of forest and 17 ha park along the left bank of the Meuse over its entire length, the other three sides were enclosed by walls of about two meters high. In 1902 the castle and the park were sold to the Baron of Chadenet, ennobled by Emperor Napoleon III for having strongly supported. A few years later the 195 ha of forests were sold to brothers Nathan (wood took the name of Nathan Wood). On 25 June 1915, the castle was requisitioned Monthairons to install a military evacuation hospital sold exclusively to American troops. At first, this hospital was equipped with the 3/67 ambulance, a hospital and section 3/6 of the surgical ambulance No. 13, which was posted about a week in mid-April 1916 the composer Maurice Ravel. The hospital functioned throughout the war.During World War II, the castle was occupied by German troops. Bought in 1985 by the Thouvenin family since 1989, revived the castle Monthairons as qu'Hostellerie of charm and character. April 15, 2016, the Meuse 14-18 Association in partnership with the Association of Friends of Maurice Ravel organized a commemoration (concert, exhibition, memorial plaque) of Maurice Ravel passage centennial as a soldier in Verdun.

How To Get To Château des Monthairons (Map):