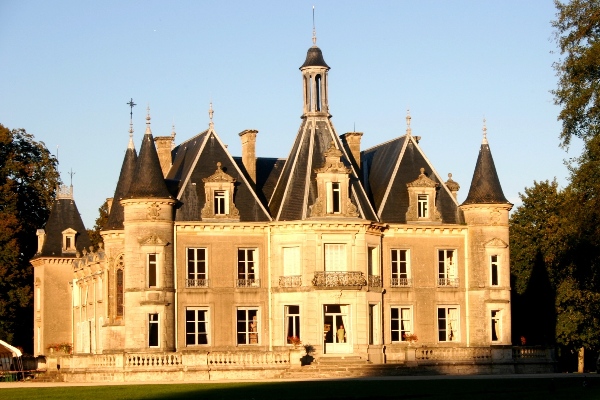 Location: Thillombois, in the Meuse departement of France (Lorraine Region).
Built: 17th century.
Condition: In good condition.
Ownership / Access: Owned by the Town.
ISMH Reference Number: PA00135418
Notes: Château de Thillombois is a Renaissance castle located Thillombois in Meuse; it was greatly remodeled in the nineteenth century it is the subject of a registration as a historic monument since March 6, 1995.The original date of the twelfth century castle, where it has a much larger size than the current castle and then one of the largest medieval areas of the sector owned by a French noble family with among others Castle Jarny (Meurthe-and- current Moselle). Heavily damaged in the seventeenth century during the Thirty Years War, the castle manages to retain a tower and a wing while the surrounding villages are looted by Croatian mercenaries named "Cravtas" at the time. Restored by successive generations, drained of all his property during the Terror, the castle finds a new aspect to the nineteenth century when the heir to the estate, Countess of Oryot Apremont-married Count Nettancourt-Vaubécourt which allowed a contribution sufficient capital to add around 1873 new main building and restore existing pieces. Castle Thillombois remain within the Nettancourt-Vaubécourt family until 1961. Acquired in the year 1961 by the town of Mantes-la-Ville (78), it becomes a summer camp center. The center became obsolete in the 1980s, it is left to its fate until the early 1990s, when he was hired by the cultural association Knowledge of the Meuse. The latter restores the furniture and made to live through various events. In 2010 the Association became the owner, so that the building remains in the public domain.

How To Get To Château de Thillombois (Map):