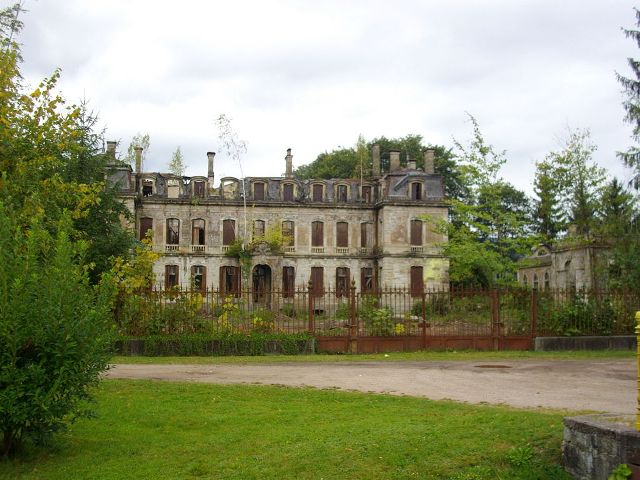 Location: Saulxures-sur-Moselotte, in the Vosges departement of France (Lorraine Region).
Built: 19th century.
Condition: In good condition.
Ownership / Access: Owned by a private company.
ISMH Reference Number: PA00107294
Notes: Château de Saulxures says Versailles Vosges or the little Versailles built under the Second Empire from 1854 to 1861, the plans of architect Charles Perron, is located rue de la Gare, in Saulxures-sur-Moselotte in the Vosges. Its construction was commissioned by Elizabeth Géhin born Mathieu, widow of the first textile industry of the town Jean Theobald Géhin, during the heyday of the textile industry and industrial development in this part of the Vosges in the nineteenth century in tribute to her husband died prematurely. It is now abandoned and was even threatened with demolition. Originally, two large windows connected the main building with two outbuildings. Facades, roofs and outbuildings are listed as historical monuments, by order of 21 December 1984.