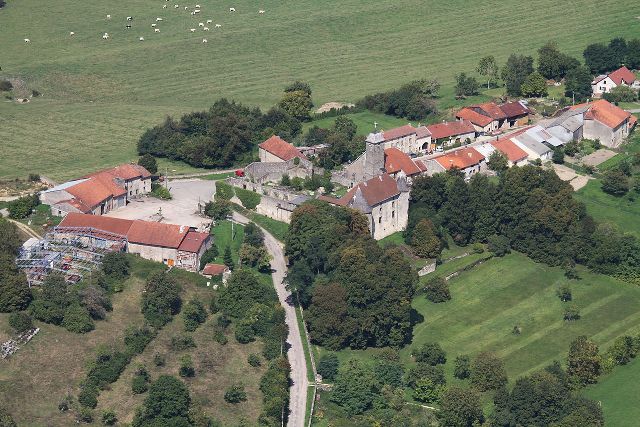 Location: Saint-Baslemont, in the Vosges departement of France (Lorraine Region).
Built: 16th-17th century.
Condition: In good condition.
Ownership / Access: Privately owned.
ISMH Reference Number: PA00107273
Notes: Château de Saint-Baslemont is a castle in the municipality of Saint-Baslemont west of the Vosges department in Lorraine. Castle St. Baslemont stands on the southern tip of a hill where the village is built of the same name. It is adjacent to the parish church of St. John the Baptist. On a hill, it overlooks the goat-rock valley through which flows the Thuillières stream that flows into the Saône Bonvillet. From the top of the hill can be seen to the east of the neighboring village Thuillières and its castle built by the architect Germain Boffrand the eighteenth century. The castle was heavily altered over the centuries. It stands today as an L with the main building flanked by two towers on one side and the dependencies of each other. The main building has a high south facade was pierced in the late seventeenth and early eighteenth centuries to bring up to date the castle. It overlooks two terraces landscaped gardens. The north side overlooks the courtyard which certainly dates from the late seventeenth century. The body of symmetrical house has an elevation of three levels of coaching openings of red sandstone. Originally the windows were fitted with windows. The roof covered ridges of tortoiseshell tiles was completely redone after the 1975 fire Inside, the castle houses the vaulted rooms, silos and dungeons of medieval times. A ceremonial staircase provides access to the garden below. The two round towers of the fourteenth century are covered with conical roofs of shingles but are of unequal size (originally, the castle was surrounded by four towers). The smaller tower, located southeast, is pierced by three deadly at its base; the largest tower, the southwest, is pierced by a lethal-gunboat halfway up several gunboats sawtooth under the roof. All these defensive openings are located on the south side. Indeed, the north side, now facing the courtyard, old gunboats were still visible sometimes bites. The outbuildings form the second part of L. They are located west of the courtyard and date from the Renaissance. They have contemporary openings and few windows, the oldest, has long blocked. A high perimeter fence wall the courtyard with a monumental gate in the halfpipe, and its gate wrought iron eighteenth century. The grille is flanked by two pilasters polygonal bases and transoms molded drums, topped with carved vases (vase fell in 2015).

How To Get To Château de Saint-Baslemont (Map):