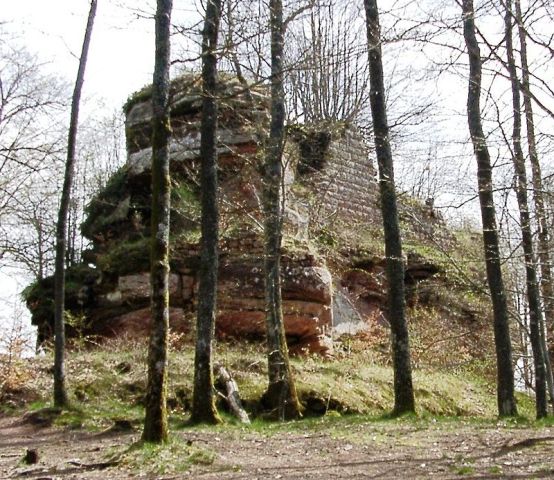 Location: Philippsbourg, in the Moselle departement of France (Lorraine Region).
Built: 9th-13th century.
Condition: Ruins.
Ownership / Access: --
Notes: Château de Rothenbourg is located in the town of Philippsbourg in the Moselle department. The castle, located on the height called Rothenberg or Rodenberg, north of Falkenstein, dates back to the ninth century. Around the year 912, the bishop of Strasbourg, Otbert, driven by rebellious subjects, fled to the Rathburg is perhaps Rothenburg, and was murdered shortly after. Rothenburg partly belonged in the fourteenth century, the Count Walram of Deux-Ponts-Bitche who gave the fief, in 1353, Gerhard Harnasch of Weikirchen. In 1369, Rothenburg was captured and destroyed by Strasbourg. The castle seems to have given its name to the family Blick Rothenburg, holding several strongholds of Bitche Sires, who died in 1749.

How To Get To Château de Rothenbourg (Map):