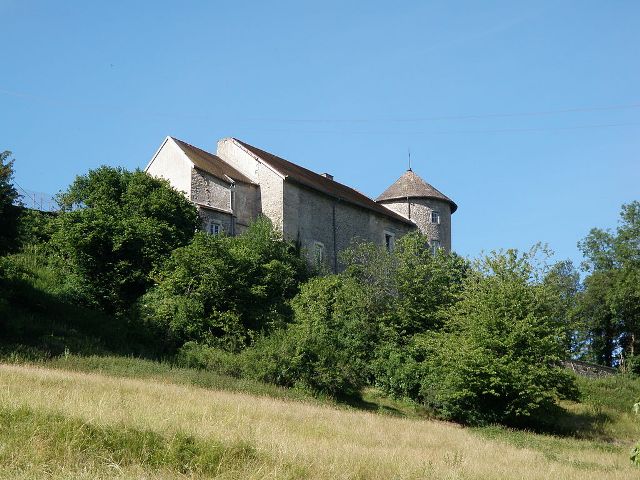 Location: Sionne, in the Vosges departement of France (Lorraine Region).
Built: 11th-13th century.
Condition: In good condition.
Ownership / Access: Privately owned.
Notes: Château de Rorthey is a castle of the town of Sionne northwest of Vosges in the Lorraine region. The architectural retains the smooth and powerful character desired by Joffroy Bourlémont the thirteenth century. The three high castle walls form a triangle surrounded by four towers, three in each of its vertices. The triangular pregnant wife natural edge of the southern slope and northwest. On the northeast side, a long gap of 50 m and 15 m wide was dug in the limestone substrate to isolate. On the northeast wall, 60 meters long, are located three round towers: the north tower, 8 meters in diameter, equipped with loopholes for controlling the path (XIII century), the powerful central tower with a ground -from vaulted floor equipped with latrines (XV-XVI centuries, 11 m diameter, 4 m thick) and the southeast tower (thirteenth-fourteenth centuries, heavily reworked in the eighteenth century to make it habitable). Also included is the beginning of the stately home with the Gothic chapel (XIII century) with two bays that has lost its vaults and its choir. On the south wall, 80 meters long, were built the main buildings of the stately home that has been significantly modified in the sixteenth century with a tower staircase, fireplaces and Renaissance windows. The western part of this house has disappeared today, one can still see the foundations of the southwest square tower upon which a platform 10 m by 10 with its well. On the northwest wall, 90 meters long, are backed buildings stables and barns (45 mx 10) and the gateway (XIII century) of the domain. Located in the north, the double doors, 3 m wide, has a large pointed arch; she lost her harrow but keeps the hinges that suggest the heavy doors. Now become a farm, the castle retains many feudal fortifications. It is not subject to date of any registration or classification as historical monuments.