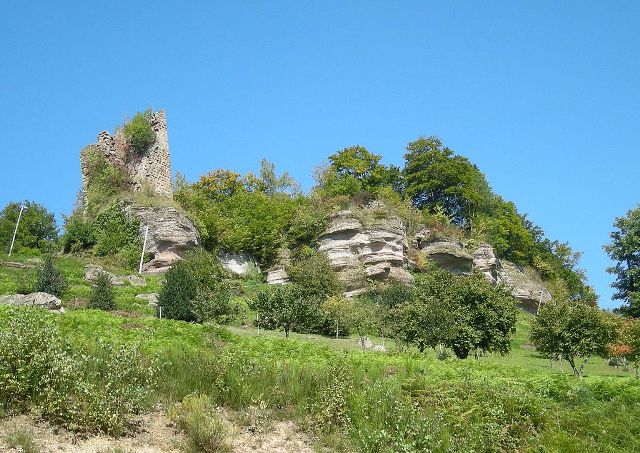 Location: Pierre-Percée, in the Meurthe-et-Moselle departement of France (Lorraine Region).
Built: 12th century.
Condition: Ruins.
Ownership / Access: State property.
ISMH Reference Number: PA00106331
Notes: Château de Pierre-Percée ruins are 10 kilometers east of Badonviller on the common current of Pierre Percee, in Meurthe-et-Moselle. It was built in the Middle Ages. This castle is the subject of a classification as historical monuments since 21 September 1981.Located 495 meters above sea level, the castle is located on a top of the Lorraine foothills of the Vosges; it occupies a rocky ledge of ENE-WSW orientation over 120 meters long and about 12 meters high, made of sandstone to conglomerate locally very friable.The backyard of the castle lay on the northwest side, the less steep the slope. A small village church was built with the stones of the castle below. At the foot of the mountain bearing the castle was established during the twentieth century Lake Pierre Percee, contributing to the romantic character of the site.The earliest mention pretend certify the existence of a feudal construction in Pierre Percee comes from a chronicle written around 1140; it relates to Albertum Longuicastro, a nobleman who lived in the middle of the eleventh century. Longuicastro would Latinization of Langenstein (the long stone, on which is built the castle), castro with similar meaning in old German with Stein that designates a castle. Albertum or Adalbert is a cadet of the family of the counts of Alsace. Duke of Lorraine appointed by the Emperor Henry III, it is probably he who built the castle which it takes its name. He was killed November 11, 1048 at the Battle of Thuin by Godfrey II the Bearded who wanted his duchy. Henry III then gives the Duchy of Adalbert's brother, Gérard, Duke of Lorraine. His daughter Matilda wife Folmar IV, Count of Metz, whose son Godfrey carries the title of Earl of Langenstein3. He joins Agnes of Bar before 1100, but died in 1110. Tradition dates the initiative to Agnes before digging a well in 1138 some 100 feet (approx. 30 meters), to the southwest of the rock aplomb. Only the upper part of the well is still visible; its diameter is 2.20 meters. The completion of this work without doubt exceptional for the time has not failed to dampen spirits, since frequently pointed to the fortress as the Petrae Perforatae Piereperciée in Latin and Old French. This did not prevent the owners continue to be called counts of Langenstein (or Langstein) again in 1150.