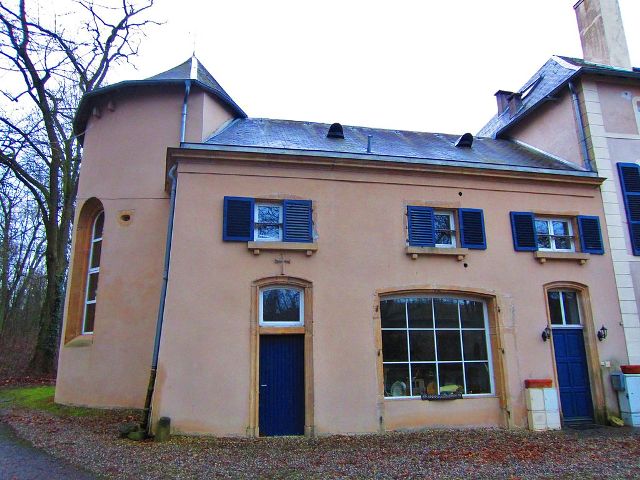 Location: Montoy-Flanville, in the Moselle departement of France (Lorraine Region).
Built: 18th century.
Condition: In good condition.
Ownership / Access: --
Notes: Château de Montoy is in Montoy-Flanville in Moselle is a three-storey building remodeled in the eighteenth century. Around, there remain only a few elements in the extension of the north wing, the square tower of the guard (sixteenth century), originally higher, and in the extension of the south wing of the so-called round tower of the chapel . The castle was heavily restored, especially after 1965. One can also note the existence of a pigeon on the back of the field and Graves Brazy-Durand families Aunoux in the currently disused chapel. The castle belonged to John Cheverson 1480, master alderman from Metz in 1476. It was besieged and burned in 1518 by more than 3 000 men under the command of Franz von Sickingen in a punitive expedition against the city of Metz. Michel Chaverson made rebuild the castle, he turned into a solid fortress. Philippine his daughter brought in dowry in 1531 to Robert Uh, Lord Clervant, significant Huguenot leader, master alderman of Metz in 1533 and 1541. In 1542, under the Alderman of his brother Caspar, Robert Guillaume brought preach Farel in Metz. Castle Montoy becomes a center of the Reformation in Metz Country. Sold the castle in 1618 by Nicole Vienna, then changed owners often. In the eighteenth century it belonged to the officers of the Parliament of Metz, Philippe Armand-Charuel, mortar president and in 1748 Jean-Nicolas Brazy, Adviser. He then passed to his son Peter, then after 1834 by inheritance, Louis Durand Aunoux, lieutenant colonel of cavalry and his Adelaide-Louise Larminat wife, died childless. In 1885, Pierre-Louis Baron Larminat sold the estate with the castle and the chapel Dominique Just to Verny. Today it is completely renovated in several apartments.