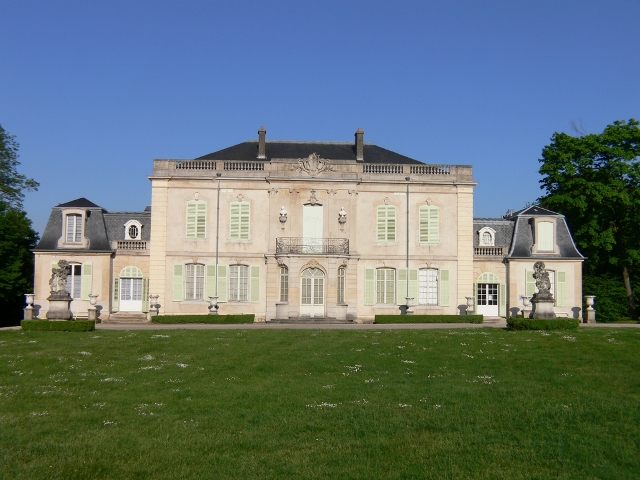 Location: Laneuveville-devant-Nancy, in the Meurthe-et-Moselle departement of France (Lorraine Region).
Built: 17th-18th century.
Condition: In good condition.
Ownership / Access: Owned by the Town.
ISMH Reference Number: PA00106055
Notes: Château de Montaigu is a castle located on the French town of Laneuveville-devant-Nancy near Nancy, in the Montaigu Park (which also extends to Jarville-la-Malgrange), close to the museum of history iron.At the end of the eighteenth century, Bon Prevost, RG farms Lorraine, built a house of pleasure on a hillside to 1758. When the Marquis de Vaugiraud bought it in 1856, he gives it the appearance of a castle thanks to the intervention of architect Albert Jasson. Residence Edouard Salin (1889-1970) from 1920, metallurgical engineer, archaeologist who contributed to the archaeological excavations of the Gallo-Roman sanctuary of Grand, writer, scientist and collector, he bequeathed to the Museum Nancy Lorraine. Part of the park was sold in order to build on the Iron History Museum. The chapel of Montaigu in the castle park was listed as historical monuments by order of 22 January 1934; The castle itself was recorded December 6, 1957; façades and roofs, as well as its park, were classified January 27, 1958; and finally outbuildings were recorded April 7, 1998.