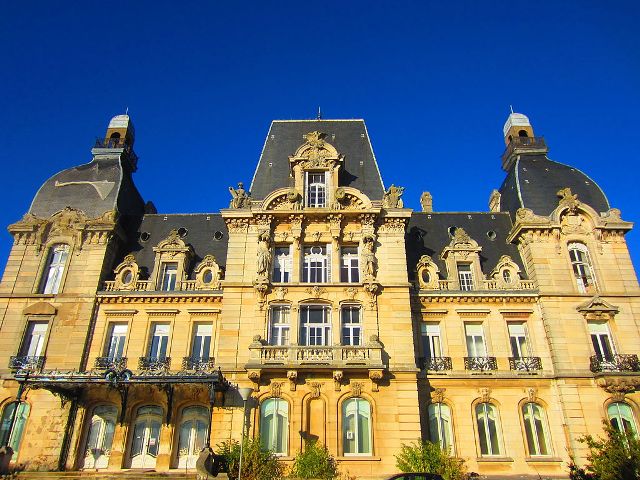 Location: Ars-Laquenexy, in the Moselle departement of France (Lorraine Region).
Built: 19th century.
Condition: In good condition.
Ownership / Access: Privately owned.
Notes: The Château de Mercy is a building located near the district of La Grange-aux-Bois in Metz, Moselle. It was part of the town of Mercy until its merger with the town of Ars-Laquenexy. During the German annexation, Metz is transformed by the action of the imperial authorities, which make its planning a showcase of Wilhelmine architecture. The architectural eclecticism then results in the appearance of Romanesque Revival style buildings, Gothic Revival, or even neo-Renaissance style. In response, some Francophile owners react by building clearly French inspired buildings. Contemporary Governor's Palace, Castle of Mercy illustrates this resistance movement, facing the spread of Germanic style. Wanted by Maurice Coetlosquet, the castle was built by his widow in 1905. An Alsatian architect from the École nationale supérieure des Beaux-Arts de Paris began work. The castle is built with stone from Savonnières, imported from Barrois, in typical French style, wanting expression Francophiles feelings of its owner. A French garden full at the time the castle grounds. Residence of the family of Coetlosquet, the castle becomes French in 1919. The Moselle again having been annexed by Nazi Germany in 1940, the castle serves as a "Lazarett", that is to say a military hospital for German army. The Reserv-Lazarett Metz II becomes French in November 1944, and served until 1966 Staff at the Royal Canadian Air Force. The castle became a property of the French army in 1968 4. Sold in 2000 to the urban community of Metz Métropole, with the land of the future Mercy Hospital, Mercy castle was sold to an investor in 2012 messin in order to be restored.

How To Get To Château de Mercy (Map):