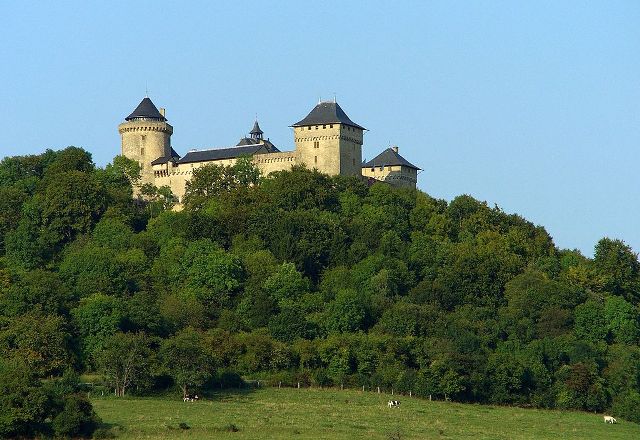 Location: Manderen, in the Moselle departement of France (Lorraine Region).
Built: 1419-1434.
Condition: In good condition.
Ownership / Access: Owned by the Department.
ISMH Reference Number: PA00106800
Notes: Château de Malbrouck is a castle in the town of Manderen in the north of the Moselle, belonging to the County Council of the Moselle. It is the subject of a classification as historical monuments since February 1930.The castle is built on a rocky outcrop overlooking the region by the will of Lord Arnold VI of Sierck in 1419 and completed in 1434, when the castle was declared able to withstand a siege, and put to the electorate service Trier. It overlooks the village of Mandi. Unfortunately, the death of Arnold Knight, descent is not secured and the castle will pass from hand to hand from the late fifteenth to the early seventeenth century. His nickname comes from the John Churchill Duke of Marlborough, immortalized in popular song marlbrough s'en va-t-en guerre. The latter briefly installed its neighborhoods June 3, 1705 during the War of Spanish Succession before retreating on Trier two weeks later. During the War of Spanish Succession, the castle of Meinsberg finds himself at the forefront of the international scene. England and the United Provinces join the Empire and France is faced with a European coalition and its warlord, John Churchill, Duke of Marlborough, as the French call him Malbrouck. At the beginning of 1705 years, the Duke of Malbrouck preparing his invasion of France plan through the Moselle valley, and gathers an army of 100,000 men in Trier. In June 1705 he has this army at the gates of the kingdom of France, Moselle at Castle Meinsberg, where he set up his headquarters. Facing him, the Claude-Louis-Hector de Villars marshal is preparing to defend the border with less than 50 000 men. At one against two, Villars can not afford to attack. Malbrouck, who holds in high esteem Villars, decides to attack with the backing of the Prince of Baden, Louis William of Baden-Baden, to whom he made an appointment to Castle Meinsberg. In the meantime, Malbrouck done all that Villars kind of positions but one patient did not move. Face to face and lasts ten days without supplies for the army of the coalition, so much so that soldiers Malbrouck, suffering from food deficiency, deserting one after the other. The Duke of Malbrouck therefore resigned to leave the place without fighting the battle and enjoys a foggy night to go back to Trier and Maastricht. On June 17 in the morning, Villars was surprised to see the disappearance of the enemy troops. Malbrouck is, it went leaving his name to this castle. Castle Mallbrouck was sold as a National Property in 1793 but suffered the ravages of time and various looting. Although historical monument in 1930, it is ruined when it was bought by the General Council of the Moselle in 1975 to Weiter family. Thus began the remarkable work and the second site of Historical Monuments of France. The castle is completely renovated from 1991 to 1998.

How To Get To Château de Malbrouck (Map):