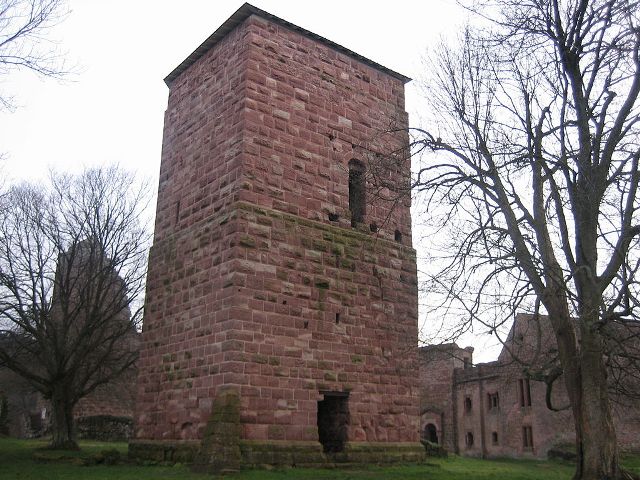 Location: Lutzelbourg, in the Moselle departement of France (Lorraine Region).
Built: 11th century.
Condition: In good condition.
Ownership / Access: Owned by the Town.
ISMH Reference Number: PA00106799
Notes: Château de Lutzelbourg is a castle founded by Pierre de Lutzelbourg in the eleventh century on a rock high above 322 m the valley of the Zorn in France, Lutzelbourg, Moselle. It is the subject of a classification as historical monuments since February 1930.Pierre's father in Lutzelbourg Frederick Monbéliard is very noble lineage as related to the powerful House of Savoy. At his death in 1092, the magraviat Susa - as inherited by Agnes de Savoie his wife, daughter of Count Peter I, Count of Savoy - was claimed by the Emperor Henry IV, it can therefore return to Pierre. By Pierre duty must be established on ancestral lands between Philippsburg and the Zorn Valley. 1100 Pierre negotiates the exchange of Saint-Quirin Priory with Lutzelbourg castle of the Abbey of Marmoutier in Alsace. Reginald will be the only son of the union of Pierre and Ita, his death a few days after Christmas 1142 left the county without descendants. The bishop of Metz receives sovereignty in 1150 and gives custody to the first Lords of Lutzelbourg.In 1840 the ruins of the castle of Lutzelbourg were saved from demolition by Adolf Germain, notary in Phalsbourg because the owners wanted to sell the materials of the ruined companies who built the railway line.After several successive sales Eugène Koeberlé, professor of medicine in Strasbourg, bought the site. Around 1900 he decided to consolidate the ruins, to excavate and built the neo-Romanesque hall. In 1909, he published his work in Strasbourg Ruins of Castle Lutzelbourg where it reports its findings and assumptions.

How To Get To Château de Lutzelbourg (Map):