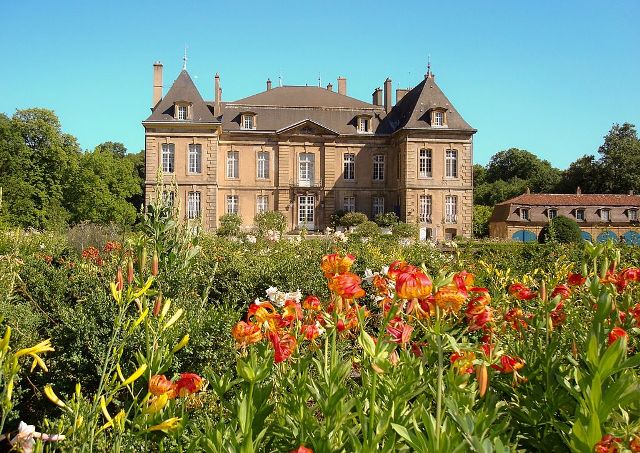 Location: Manom, in the Moselle departement of France (Lorraine Region).
Built: 1731.
Condition: In good condition.
Ownership / Access: Privately owned.
ISMH Reference Number: PA00106801
Notes: Château de La Grange built in 1731 is located at a place called la Grange in Manom (Moselle) in Alsace-Lorraine-Champagne-Ardenne. It is the subject of a classification as historical monuments since February 1984. Located halfway between Metz and Luxembourg City, Castle and Gardens Prairiales are open to visitors.A castle was first mentioned in 1106. It belonged successively to the La Grange family, then moved to the end of the fourteenth century to the Solouvres family. 1445 in the early sixteenth century it belongs to the Chinery family, then the family until 1657 in the Brandenburg Argenteau family until 1701 when it was acquired by Gome Brice Hazards.Le castle was ruined by Thirty Years war then rebuilt by his son Christopher Gome of the Hazards from 1731 on the plans of the architect Robert de Cotte and sold Fouquet in 1752, to return to the family in 1803 Bertier. During the two world wars, it is busy and very damaged. It was restored in 1950.

How To Get To Château de La Grange (Map):