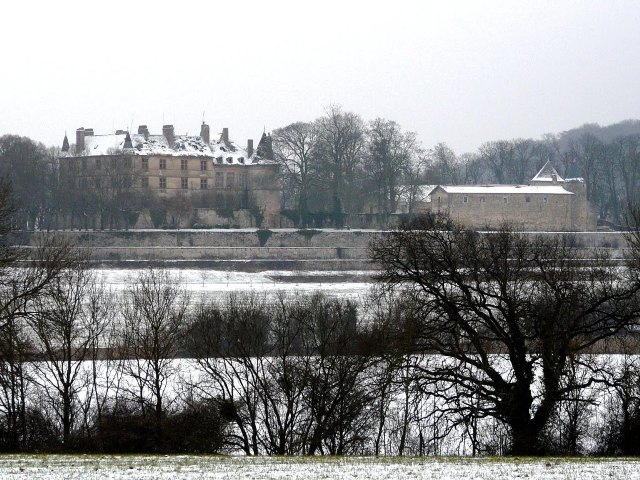 Location: Hombourg-Budange, in the Moselle departement of France (Lorraine Region).
Built: 1566-1719.
Condition: In good condition.
Ownership / Access: Privately owned.
ISMH Reference Number: PA00106786
Notes: Château de Hombourg-Budange is a castle in France located in the town of Hombourg-Budange in Moselle, in the Canner Valley. Built on a fortified promontory in the Middle Ages, the castle is Renaissance for three of its wings and classic style for the fourth wing. Homburg Castle is the subject of a classification as historical monuments since 1928 and 1994.On a promontory overlooking the Canner valley built a castle-fortress of the thirteenth century or fourteenth century, due to a branch of Varsberg, home of Raville, it belongs to the early fifteenth century. Many of the enclosure remains of the fortress are still visible (curtain wall and towers) In the early fifteenth century, the castle falls to Créhange: Guillaume Créhange restores and strengthens from 1536 to 1551. Castle burned down in 1552 following the siege of Metz. Wyrich Créhange, brother of William, the reconstructed since 1558. Then he adds stables and attic, he established a new castle, probably U of 1560-1574. In the seventeenth century the common partially processed. The castle became in 1655 the property of Antoine Joachim Lenoncourt and the same year that Antoine de Prisacier, killed outside his castle by the imperial troops. His son, Jacques Gustave Malortie, Marquis of Boudeville, built the north wing of the castle in 1719. In the eighteenth century common part repercés. Then by succession, the castle falls to Hunolstein. The castle has the arms of Créhange, the Brisacier, the Malortie. Count Charles Louis de Rochechouart Mortemart, made some changes in 1955. Its direct heirs still own. Since the condition is very run down.