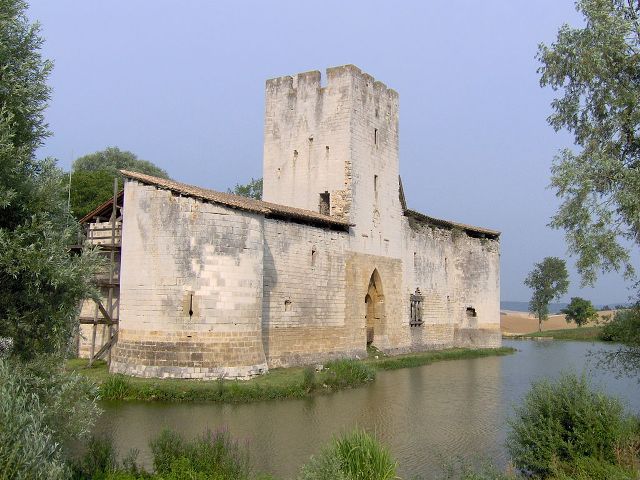 Location: Vaucouleurs, in the Meuse departement of France (Lorraine Region).
Built: 14th century.
Condition: In good condition.
Ownership / Access: Privately owned.
ISMH Reference Number: PA00106648
Notes: Château de Gombervaux is a castle of the fourteenth century near Vaucouleurs in the Meuse, in Alsace-Lorraine-Champagne-Ardenne. This stronghold, which he hardly remains the facade, was with four corner towers and a lofty tower-porch niche. Part of the castle (by abuse of language) was used as a quarry by the inhabitants of neighboring villages. The castle is surrounded by a moat filled with water, fed by three sources. The moat is controlled by a valve and the overflow flows into the gulf called Gombervaux ".The site Gombervaux was classified as historical monuments by order of 21 March 199 .. The creation of the Gombervaux Association on 11 January 1989 has saved the castle was then a totally abandoned, its moat no longer existed, and vegetation had invaded the castle. Through the efforts of the association Castle Gombervaux could rise from the ruins, many elements have been restored. The association runs the place by organizing cultural and tourist activities, attracting a large audience eager to know better this regional heritage. To learn more about the association and its activities, you can go to their website www.gombervaux.com.1338: Geoffroy Nancy receives the stronghold of Gombervaux. Between 1338 and 1357: Construction of the castle. From 1334 to 1341: Vaucouleurs attachment to the royal domain, and June 10, the city and its French ban become permanently. Vaucouleurs is described as good walled city and its bourgeois inhabitants of the king. Castellany, composed of 21 villages, became a royal provost. But the final act of connecting only intervene July 4, 1365, at the death of Henry Vaudémont count, to which Charles V had granted the lordship. 1367: King Charles V and the Duke of Lorraine signed the Treaty of the castle Vaucouleurs. Charles V wants to strengthen security on the borders is better to concentrate on the war against England. The king would prevent private wars that the feudal lords indulge and destabilizing the region. On this occasion, a sumptuous banquet took place at Castle Gombervaux, with the participation of Taillevent first royal chef. Present at the banquet: the Duke of Lorraine, John ;Charles V, grand-son of Philip VI gave the castle to Geoffroy de Nancy;the Duke of Bar, Robert I, and his wife Marie de Valois (daughter of John II).Olivier de Clisson, a Breton great feudal lord.

How To Get To Château de Gombervaux (Map):