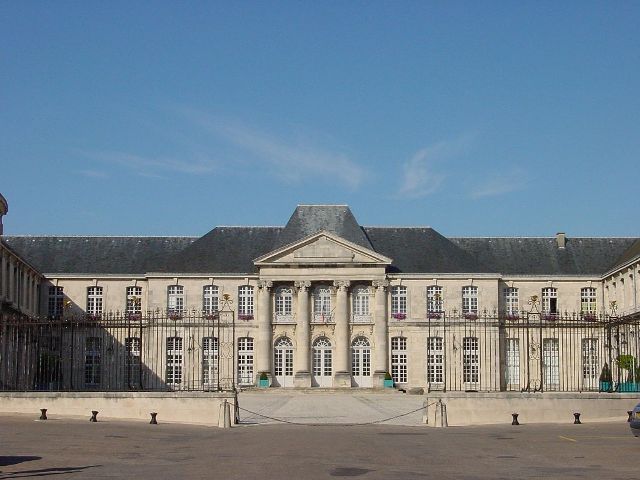 Location: Commercy, in the Meuse departement of France (Lorraine Region).
Built: 1708-1747.
Condition: In good condition.
Ownership / Access: Owned by the town.
ISMH Reference Number: PA00106509
Notes: Château de Commercy Commercy is located in the department of Meuse, once capital of a sovereign principality which fell to Charles-Henri, Count of Vaudemont, legitimated son of Duke Charles IV of Lorraine. The castle is the subject of a classification as historical monuments since 1960, while the joint is classified since June 1972.1708: Count Charles Henri, Prince of Commercy (1649 - † 1723), natural son of Duke Charles IV of Lorraine, acquired the principality of Commercy. He built this little city on the remains of a medieval castle, a vast baroque castle by architect Nicolas of Orbay4. The Benedictine of Saint-Mihiel, Leopold Durand, under the inspiration of Germain Boffrand, draws up the plans and keeps the foundations of an ancient castle flanked by round towers. 1723: Count Vaudemont, a widower with no surviving children, gives his principality and its castle to his cousin the Duke Leopold, Duke of Lorraine. At his death in 1729, it was his son Duke Francis III of Lorraine who inherits. 1737: After the War of Succession of Poland, Lorraine and Barrois are granted during life to Stanislas Lesczynski, dethroned king of Poland but stepfather of King Louis XV of France. The Dowager Duchess Élisabeth Charlotte d'Orléans, widow of Duke Leopold I, obtained the sovereignty of the principality. She made the castle his residence until his death in 1744. 1744: On the death of the Dowager Duchess, the castle became the property of Duke Stanislas Leszczynski. The former king of Poland in fact one of his favorite residences. With its courtyard, he made frequent visits to Commercy, where the label is more relaxed at the castle of Luneville. Voltaire, Émilie du Châtelet and Jean François de Saint-Lambert in 1748 come to spend the summer at the castle. In 1755, Madeleine Paulmier slept in the castle and, according to legend, gave his name to the famous cakes ... King Stanislaus also develop annexes: the "water tower" along the Meuse and the "Royal Fountain" in forest Commercy, who is his hunting ground.1977: completion of the restoration work. Indeed, following the damage associated with the Second World War, the city side facades have been completely restored giving way to majestic square shaped horseshoe. It now houses the services of the town hall, the municipal library and various administrations.