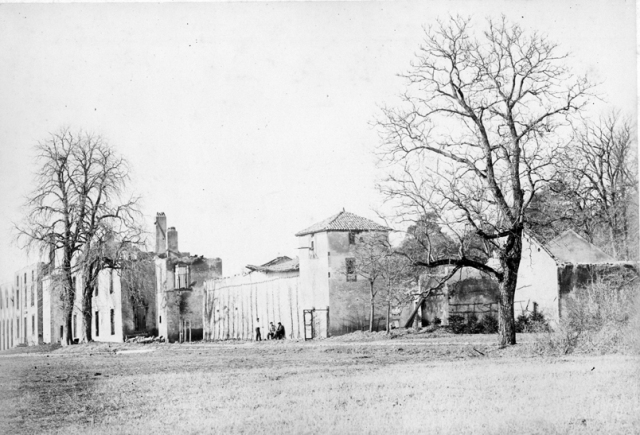 Location: Coincy, in the Meuse departement of France (Lorraine Region).
Built: 18th century.
Condition: Ruins.
Ownership / Access: --
Notes: Château de Colombey located in Moselle Coincy was a castle of the old town of Colombey, built by Baron Tschudi in the eighteenth century. It was burned during the Franco-Prussian War of 1870 and completely demolished after World War II.In the tenth century, Colombey is a collection of huts serving as homes serfs with its center in a castle with turrets with arched windows, thick walls studded with loopholes. A turret topped by a metal pigeon, the pigeon. Another ends with an iron cross is the chapel, Saint-Nabor future church. The highest tower, remarkable for its entry arched and jagged crests emblazoned using weather vane, is the dungeon. In 1681, the old castle is still standing at the end of the village, the church side, with its dovecote four pillars badge of high justice and speaker towers. In the eighteenth century, Theodore Tschudi demolished the old feudal castle to build a big house in the style of the time: less imposing but more pleasant to live in and more comfortable, opening onto a garden. He begins to develop the small wooden park full of the Lorraine essences: beeches, oaks and charms. His son converts the vicinity of the castle in English park. He planted trees at great expense from Asia, Africa and America and allows his contemporaries to know around Metz locust, acacia, Sophora the American walnut or the varnish Japan.The castle taken and retaken during the clashes of the war of 1870, was burnt September 27, 1870, the park, gardens and nurseries devastated. It will be burned by order of the place of Metz on October 27 of that year.Today it is difficult to locate the castle in the middle of the park that no longer serves as cattle. It remains foundations, large cellars covered with a mound of earth and already large trees, a deep well of about twenty meters and an average building, still standing, which served as a stable for the castle.

How To Get To Château de Colombey (Map):