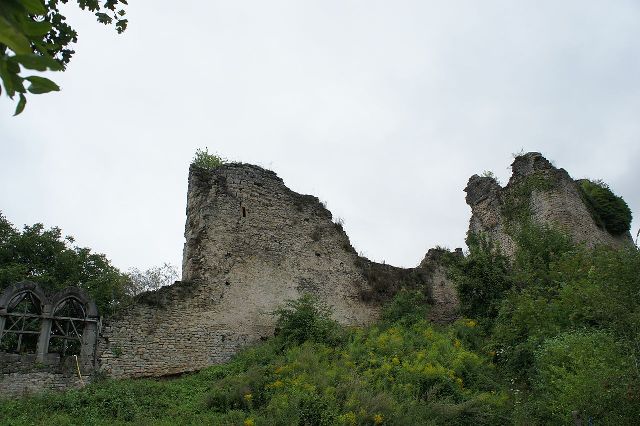 Location: Blâmont, in the Meurthe-et-Moselle departement of France (Lorraine Region).
Built: around 1200.
Condition: Ruins.
Ownership / Access: Owned by the Town.
ISMH Reference Number: PA00132621
Notes: Château de Blâmont is a castle of the town of Blâmont southeast of Meurthe-et-Moselle department in the region Alsace-Lorraine-Champagne-Ardenne.Blâmont Castle was built around 1200. It is the subject of a registration as a historic monument since February 17, 1994. It belongs to the counts of Salm, end line of the counts of Luxembourg, which have since the beginning of the twelfth century a dependent territory of the Castle of Pierre-Percée (Castle Langenstein), with Badonviller capital. Protector of the Abbey of Senones, Henry III built after 1205 on the abbey lands a new castle which bears the name of Salm castle in the Bruche Valley (now in Bas-Rhin). Following a family sharing, castle Blâmont back to Frederick (or Ferry) Salm who became the first Lord of Blâmont said, while his older brother inherited the county. Upon his death, Ferry County seizes it calls - forced - to become its major nephew, Count Henri IV of Salm. Debt, the Bishop of Metz benefits in 1247 for Frederick Blâmont his vassal and become the owner of his castle. His son, Henri, nicknamed "Maus Cerviaux" (head high), is it popular in the tournament organized in 1285 to Chauvency (Chauvency tournament). It increases around 1300 the fortifications of the castle and surrounded the city walls. Became steward of the Duke of Lorraine, he commits an uncertain struggle against his cousin Count John I of Salm. But the family remains at the service of the Dukes as dignitary to extinction in the early sixteenth century. The Duke then erects the county lordship occupies Christina of Denmark, Duke's widow, which rises in the castle a Renaissance building. Damaged once during the religious wars (especially in 1587) and more heavily during the Thirty Years War. Left to the state of ruin, the medieval part will be converted into romantic castle in the nineteenth century, while the Renaissance part was rebuilt in classical style in the mid-eighteenth century. In the early nineteenth century, the property belongs to Martin Horacie successively installing a weaving there and then to Mr Mangin, officer. Upon his death in 1827 the property was sold to Louis-Pierre Duchamp. The Duchamp family retained the castle until 1912, when it was sold to chocolate Fernand Burrus. Burrus transformed the classic castle, replacing a floor and mansard roof with a pavilion roof, and by intensifying the two towers, now topped by pepperpot roofs. The site remained in that state until 1944, when it was bombed by the US military in 1944.The castle suffered numerous modifications and extensions throughout the thirteenth, fourteenth and seventeenth centuries, making him one of the most significant remnants of medieval architecture in Lorraine, including through conservation elevation of five towers. Since 1991, volunteers from the Vault Key Association strive to maintain the site and give it new life.

How To Get To Château de Blâmont (Map):