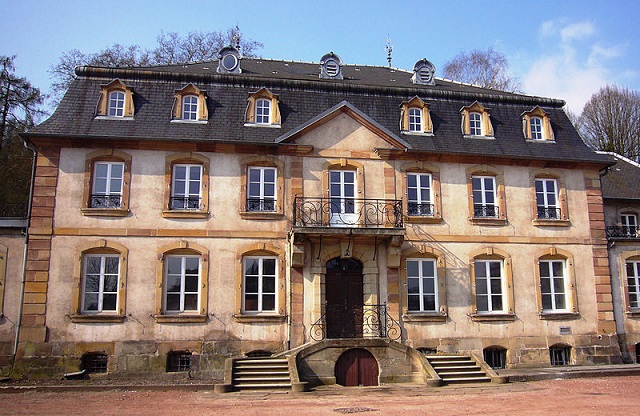 Location: Hombourg-Haut, in the Meurthe-et-Moselle departement of France (Lorraine Region).
Built: 1766.
Condition: --.
Ownership / Access: --.
Notes: The castle of Hausen is the present town hall of the commune of Hombourg-Haut. It opens on the roundabout of the street of Metz (RN3) to the west entrance of Hombourg-Haut. It is closely linked to the industrial past of Hombourg-Haut and the East Moselle.The construction of the building was completed in 1766 by Jean Charles de Wendel and his wife Anne Marguerite d'Hausen of Weidesheim. It was then located near the Wendel forge erected a few years earlier (1758/1759). It passed into the hands of d'Hausen and remained in this family until 1882, when it was bought by the Gouvy After the Second World War, the castle became the property of the Houillères du Bassin de Lorraine (HBL). It housed until 1996 the seat of the board of directors of the public establishment before being acquired in 2003 by the city which arranged it in city hall.