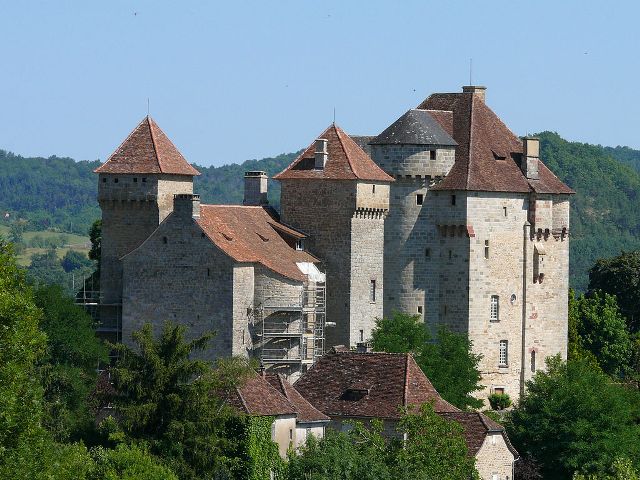 Location: Curemonte, in the Corrèze departement of France (Limousin Region).
Built: 13th-17th century.
Condition: In good condition.
Ownership / Access: --
Notes: The castles of Saint-Hilaire and Plas form a set of two castles located in the town of Curemonte in Corrèze, in Aquitaine-Limousin-Poitou-Charentes in France. The castle of Saint-Hilaire, in the center of the chamber, was built in the thirteenth century. The rectangular three-story building on the ground floor is flanked by three towers crowned with battlements and topped with roofs with flat tiles. Its entrance is Renaissance. The castle of Plas, located near the entrance is formed by two square towers. A rectangular building was added in the seventeenth century. The entrance door is surmounted by a cartouche of arms of the family of Plas Curemont and framed by rusticated pilasters. In the seventeenth century was also erected a building flanked by a tower at each end which opens to the outside with large windows baskets handles. The wall is flanked by two towers, one cylindrical and one hexagonale1. All of these constructs was listed building on 31 October 1991 and the site is registered.

How To Get To Château des Plas (Map):