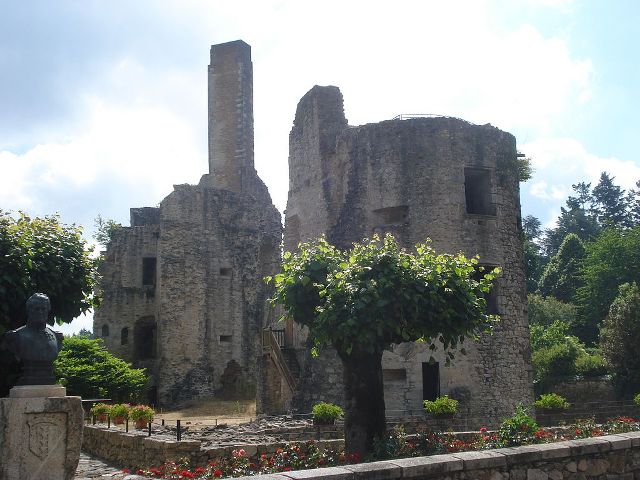 Location: Les Cars, in the Haute-Vienne departement of France (Limousin Region).
Built: 16th century.
Condition: Ruins.
Ownership / Access: Privately owned.
ISMH Reference Number: PA00100263
Notes: Château des Cars is an ancient castle, reduced to the state of the remains, which located in Cars, France. This castle has been since the sixteenth century until the Revolution one of the most prestigious Limousin because of the quality of its facilities and the reputation of its lords.The castle whose ruins still was built in the sixteenth century, recent excavations have revealed the remains of several buildings antérieurs.Avant its destruction, the castle was in the shape of a square of more than 30 meters wide, consists of a large main tower, body of the house and corner towers have disappeared. These structures were organized around an ornate courtyard. The main tower, still partly standing at the South East corner, consisted of large rooms lit by large windows. That's probably where that was the heart of the castle.Stronghold and the main castle of the family Perusse des Cars. The lord of the cars, formed in 1260 from the Vigerie Flavignac and Cars, moving from that of Lastours, becomes an independent lordship 1479.À in the late eleventh century, Rannulfe Lastours had given the village Cars (CADRIS or Quadris) to the abbey Saint-Martial de Limoges to establish a prévôté.Au thirteenth century the family of Barry, attested by milites mentioned in the records of castrated Lastours and Aixe, to have a Cars hotel (hospicium in 1367, fortalicium in 1385, hospicium and hostel in 1435) with manorial rights as vassals of the lordship of Lastours.L'histoire Cars is that of his emancipation from that of Lastours to become a châtellenie involving only the King. During this process, the hotel buses (hospicium CADRIS) exchange family with the marriage of Gabrielle Barry with Audoin Peyrusse, who settled there and whose descendants build a castle (castrum in 1445) .Geoffroy Pérusse close the kings of France with Francis I, and the kings of Navarre, built a lavish aristocratic residence for Cars, became the principal residence of the family.During the Revolution, the Pérusse emigrated to England. The castle was seized as national property, and finally sold to carriers. They demolished the materials for resale, sparing only the South West corner of artillery tower and part of the main tower. Today the castle is the property of the town that tries, with the help of an association of archaeologists, to its ruins valeur.Les remains of the castle are registered as historic monuments December 21, 1982.