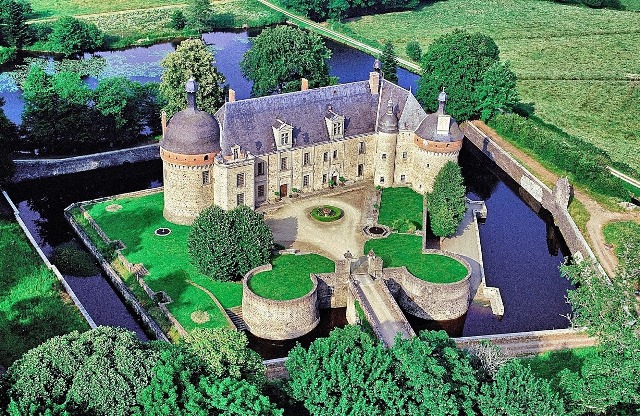 Location: Saint-Germain-Beaupré, in the Creuse departement of France (Limousin Region).
Built: 16th century.
Condition: In good condition.
Ownership / Access: Privately owned.
ISMH Reference Number: PA00100163
Notes: Château de Saint-Germain-Beaupré is located in Saint-Germain-Beaupré in the Creuse department in Region Aquitaine-Limousin-Poitou-Charentes. The castle was built in the sixteenth century on the site of a fortress of the twelfth century, for Gabriel Foucault, Lord of Saint-Germain-Beaupré. On the night of October 24 to 25, 1605 the castle hosts for a night Henri IV, accompanied by 60 people. In 1652, the Grande Mademoiselle, so celebrated during the Fronde, daughter of Gaston d'Orléans, was exiled to Saint-Germain-Beaupré by royal order of 21 October. In 1768, Anne-Françoise Eddy Saint-Germain-Beaupré sold the castle to Anne Nicolas Doublet Marquis of Persian, master of requests, which resells it just before 1789 to Jean-Baptiste Martin-Ducouret, former lawyer in Parliament, whose family retains retains until 1840. In 1840 was sold to Count Villemote which disperses in 1843-1843 admirable collection of furniture and art objects. In 1854 it was bought by the Count Honorati which trace the English park. In 1860 it was bought by Mr. Berthomier which clears the moat and ends a nearly full recovery. It is nowadays a private castle is classified historic monument by decree of May 9, 1946

How To Get To Château de Saint-Germain-Beaupré (Map):