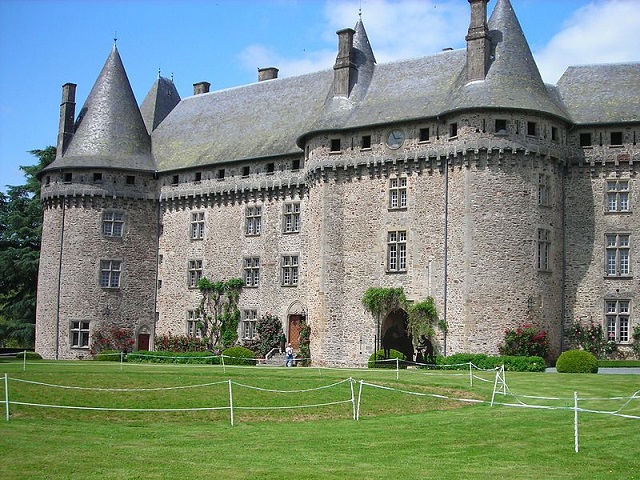 Location: Arnac-Pompadour, in the Haute-Vienne departement of France (Limousin Region).
Built: 11th century.
Condition: In good condition.
Ownership / Access: Comborn Family.
Notes: The castle of Comborn is a French castle located in the commune of Arnac-Pompadour in the department of Corrèze, in region New-Aquitaine. Its oldest parts date back to the eleventh century.From the castrum of Guy de Lastours, built about 1000, on a strategic axis between Brive and Limoges, nothing remains. The old fortress, coveted by the local lords, resisted attacks as early as 1026, but was totally destroyed during the disturbances that followed the death of King Richard the Lionheart at Châlus-Chabrol Castle in 1199. It was rebuilt in the fifteenth century by Geoffroy Helie of Pompadour. The seigneury of Pompadour was erected as a marquisate in 1614. The castle was rebuilt in the eighteenth century when King Louis XV offered it to his mistress, the famous Marquise de Pompadour, in 1745. She did not reside there, But favored the breeding of horses and created the Haras de Pompadour in 1760. The castle then serves as a dwelling for the staff (inspectors, ...).The marquisate was bought in 1761 by the Duke of Choiseul, before the creation of the mare in 1763 by the Comptroller General of Finance Bertin. In 1785, the orangery was destroyed and the great stable of 24 seats was built. In 1768, the domain became royal domain and then included 73 horses. The castle is no longer maintained and only the part of the south remains habitable in 1790. After 1793, largely depressed, there remains only the part of the south and the chatelet. Under the Consulate, the stud was ceded to the state and became a national stud farm. In 1837, a stable for 26 horses was built, called "training stable". The castle also hosted the management of the National Haras from 1870 to 2004. The castle underwent a fire of the nineteenth century.

How To Get To Château de Pompadour (Map):