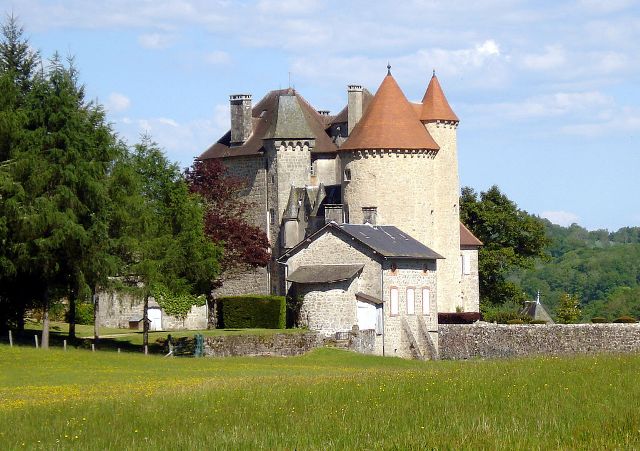 Location: Saint-Exupéry-les-Roches, in the Corrèze departement of France (Limousin Region).
Built: 15th-19th century.
Condition: In good condition.
Ownership / Access: Private property.
Notes: The Château de la Gane is Saint-Exupéry-les-Roches, 30 km north of Tulle in Corrèze. Access: D 45 (Ussel). There is evidence that it was founded in 1286 by Pierre-André de la Ganne. It is a castle of the fifteenth century alterations to the fifteenth century, seventeenth century, eighteenth and nineteenth centuries, with terraces and an eighteenth-century chapel decorated with paintings and woodwork of the nineteenth century. It was listed in the inventory of Historical Monuments December 26, 1980. Purchased by Louis Paul de Selves in 1804. The round tower that houses a chapel covered with a radiating ribs vault dates from the late fifteenth or early sixteenth century. It is flanked by a tower enclosing a spiral staircase. The rectangular three-storey house is flanked by a square stair turret. The lower wing was built in the eighteenth century. Another wing turrets and decorated with neo-Gothic windows connects the tower and the main building and the date of the nineteenth century.