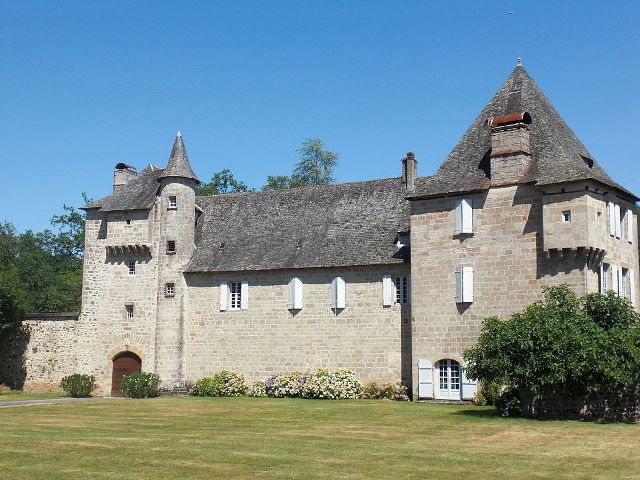 Location: Astaillac, in the Corrèze departement of France (Limousin Region).
Built: 15th century.
Condition: In good condition.
Ownership / Access: Owned by a private person.
ISMH Reference Number: PA00099657
Notes: Castle Estresses from the town of Astaillac Corrèze built on the banks of the Dordogneau during the sixteenth and seventeenth century. It is registered as an historic monument since 1971 (façade and roof). The first buildings of the castle of Estresses date from the sixteenth and seventeenth century, it has undergone significant changes in the early twentieth century. The castle is built on the terrace on a rectangular plan with a main building between two square towers. The building is supported by an imposing medieval wall 200 meters long and 8 meters high, feet in the water. His flower garden includes two thousand yews. After the 1914-1918 war, the castle was abandoned, ruined. It was later bought and restored by the Lescure family. The castle remained in the family until today. The current owner, Jean-Noël Lescure, corrézien farmer, did visit during Heritage Days.

How To Get To Château d'Estresses (Map):