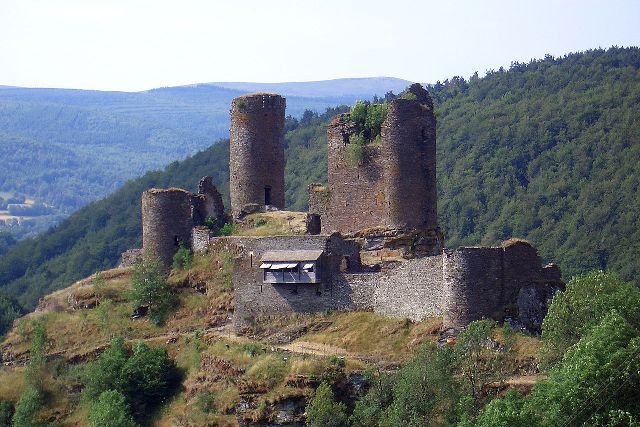 Location: Saint-Julien-du-Tournel, in the Lozere departement of France (Languedoc-Roussillon Region).
Built: --
Condition: Ruins.
Ownership / Access: --
Notes: Château du Tournel of Tournel is an ancient castle located in the municipality of Saint-Julien-du-Tournel Lozère (France). Former seat of the Tournel barons, one of the eight baronies of Gevaudan, it was destroyed during the wars of religion by the Huguenot troops Matthew Merle.Before the thirteenth century, the family of Tournel designates more than baron1 as Lord. It was during this period that the castle is built. At the time, the barony is broken down into five commandments: Tournel, Chapieu, Montialoux, Montmirat and Montfort. So the castle of Tournel is the major centerpiece and possessions that stretch of the Cévennes, to Mende following the Lot valley, and in the Valdonnez (the Nize valley and Bramont). The fortifications Castle Chapieu (on Mount Mimat, above Mende) will be consolidated by the bishop Aldebert III du Tournel, son of Odilon Guerin I, Baron Tournel. It seems that either Chapieu that was established the family before the thirteenth century (the name of Tournel having been added subsequently for Aldebert), since we easily find the name of Capio (for Chapieu) in the twelfth century, as the door trobairitz Isolde Capio. So the family took the name of Tournel to 1215, the first mention of the name is made in 1219 in homage to Odilon Guerin to Bishop William IV of Peyre. It is, apparently, on that date that the family invested the castle of Tournel. However, to 1307, the family decided to move away from the castle defense, preferring the comfort of the Boy castle in Valdonnez.