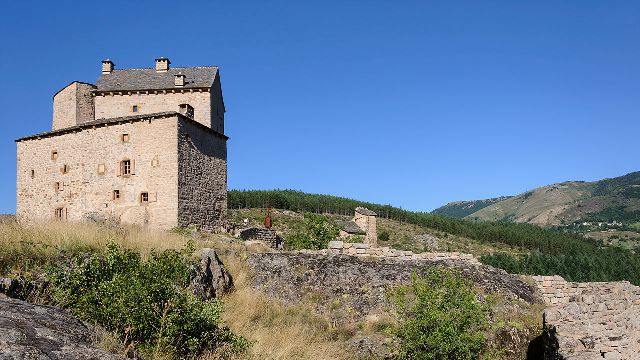 Location: Bédouès, in the Lozere departement of France (Languedoc-Roussillon Region).
Built: 13th century.
Condition: In good condition.
Ownership / Access: Privately owned.
ISMH Reference Number: PA00103790
Notes: Château de Miral is a castle located at Bédouès in the French department of Lozere.The castle is located in the town of Bédouès in Lozere, in the heart of the Cevennes, in the former province of Gevaudan.It is visible from the main road 998, about 10 km from Florac on the road to Pont-de-Montvert. It thus overlooks the confluence between the river Runes and Tarn.The castle seems to have been established in the thirteenth century, but it takes its real dimension after the sixteenth and seventeenth centuries when Malbosc family Miral enlarged successively.During the French Revolution the family who had succeeded the Malbosc Miral is sentenced to death and sold the castle. It gradually falls in ruins, to a private action in the early 1980s to refurbish it. Thus the castle is protected by registration with the historic buildings since 1984.

How To Get To Château de Miral (Map):