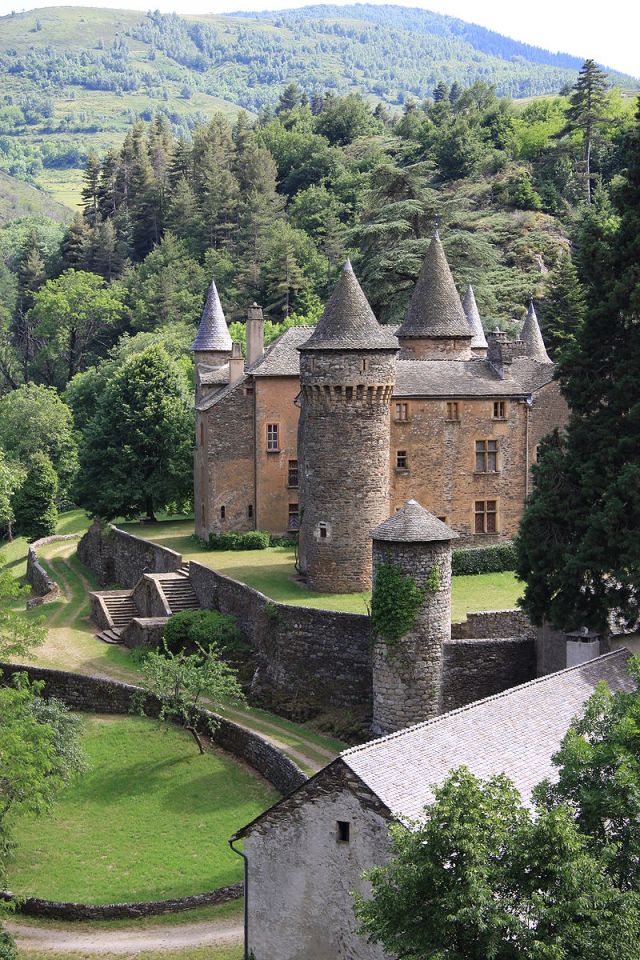 Location: Altier, in the Lozere departement of France (Languedoc-Roussillon Region).
Built: 1288 - 1308.
Condition: In good condition.
Ownership / Access: Privately owned.
ISMH Reference Number: PA00103783
Notes: Château du Champ is a strong house became castle located in Lozère Altier, France.The castle is located in the Cévennes National Park, in the town of Altier in Lozère, in the former province of Gevaudan and is a prestigious witnesses to the history of this region. It is built on a rocky promontory qu'enserre River Altier, about two kilometers upstream from the village of the same name. The castle nestled in the back of the valley, seems crushed by the power and variety of rock structures that dominate the whole landscape. Indeed, one passes a few meters from the bottom of the valley at 734 m altitude, peaks and plateaus of 800 to 1000 m and more, all compartmentalized and fragmented by the tributaries of Altier or meandering of the river. However, the castle in search of a defensive site, was built on a rocky outcrop in a meander of the river almost closed, and in a very narrow passage of the valley, which was intended to make any impracticable maneuver. It draws its old towers in a green valley below the road which joins Villefort to Mende (D901). The current road overlooking the castle is relatively recent: 1835. The former royal road passed, meanwhile, a few kilometers above the tray, serving a whole string of villages and hamlets (the Habitarelle, Villespasse, the Bergognon, Pomaret, Cubieres, etc.). The Castle Field is on the path of the GR 68 between the Villefort and Bleymard. The GR 44 also passes near the field.

How To Get To Château du Champ (Map):