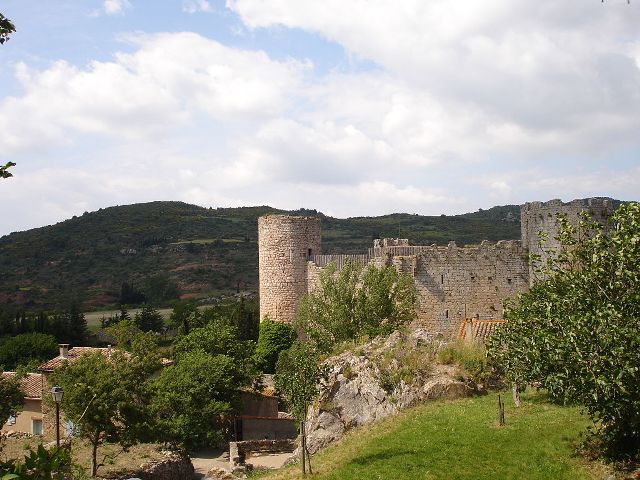 Location: Villerouge-Termenès, in the Aude departement of France (Languedoc-Roussillon Region).
Built: 12th-14th century.
Condition: Ruins.
Ownership / Access: Privately owned.
ISMH Reference Number: PA00102922
Notes: Château de Villerouge-Termenès (Occitan Vilaroja of Termenés) is a castle located in the department of Aude in the Corbières. From 1110 and until the Revolution, the castle and the village belonged to the archbishops of Narbonne. It was the seat of one of 11 Baylies of the Archdiocese, which shows that the prelates were integrated into the feudal and ecclesiastical power was based on lordships. The archbishops had to defend their property against their neighbors, both before and after the Albigensian Crusade. Villerouge was at the heart of a vast domain, as the Archbishop of Narbonne was the lord of many villages in the area and there was receiving tithes, taxes or taxes. To collect these revenues and govern his vassals, the archbishop had a bailiff (or bailiff) and Villerouge was central to the baylie. Narbonne The Archbishops endeavored to fortify this place stands out for its robustness. The great tower or dungeon in the southeast corner has three superimposed rooms, with very thick walls, which were built in stairs. We arrive at a crenellated terrace. This citadel was probably built in the thirteenth century, during the third quarter of the century, perhaps. Should we guess the new concern of the ecclesiastical authorities to better defend their property. The castle played an important role during the crusade against the Albigensians. The last "good man" Cathar, Guillaume Bélibaste, there was burnt August 24, 1321. The castle, then in ruins, the subject of a classification as historical monuments since October 6, 1976.

How To Get To Château de Villerouge-Termenès (Map):