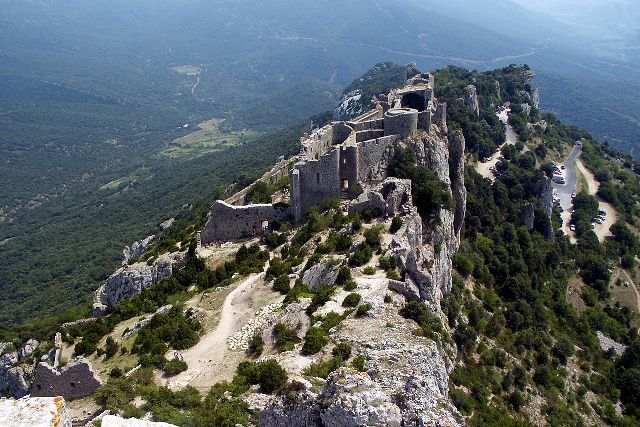 Location: Duilhac-sous-Peyrepertuse, in the Aude departement of France (Languedoc-Roussillon Region).
Built: 10th century.
Condition: In good condition.
Ownership / Access: Owned by the municipality.
ISMH Reference Number: PA00102673
Notes: Château de Peyrepertuse is a castle called "Cathar" located in the Aude department in Languedoc-Roussillon, Midi-Pyrenees.It is the center of micro-countries of the former manor of Peyrepertusès (Occitan: Pèirapertusés) which means "pierced stone".The castle is one of the "five son of Carcassonne" with the castles of Quéribus, Puilaurens, Termes and Aguilar, all located at the top of rocky peaks "stunning." It is nicknamed the "heavenly Carcassonne" because it is the largest of the five castles and was as wide as Carcassonne The site was occupied in the Roman period from the beginning of the first century BC, as shown by recent excavations. In 806 appeared the first mention of the castle in history. He was then called and Catalan Perapertusès. He belonged to the Count of Besalú, a small town in Catalonia between Figueres and Olot, in a text of 1020. The first mention of the castle dates from 1070. The castle was downgraded as site boundary at the Treaty of the Pyrenees in 1659 having lost its strategic interest. Although the citadel was much less value since the annexation of Roussillon in 1658, a small garrison commanded by a junior officer was maintained until the French Revolution, during which it was abandoned. Sold as a National in 1820, its ruins survived until today. The first monument of consolidation campaign began in 1950.

How To Get To Château de Peyrepertuse (Map):