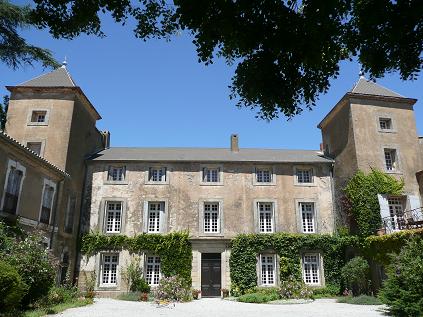 Location: Pardailhan, in the Herault departement of France (Languedoc-Roussillon Region).
Built: 17th century.
Condition: In good condition.
Ownership / Access: Famille Joecker.
Notes: Château de Pardailhan is a former stately home built in 1650. This building is located in the town of Pardailhan, Hérault department.Castle Pardailhan is built around 1650 by the family of Brugairoux the hamlet of Pontguiraud, on the site of a farm and a stately toll on the old road from Castres in Beziers. Since the sixteenth, the old fortified castle of Pardailhan, near the hamlet of Pardailho, was in ruins. The Lordship of Pardailhan belonged at that time to a half to the king, and the other half to the co-lords. The Brugairoux, owners of a fief to Pardailhan from the fifteenth, have gradually acquired all the shares of the co-lordship; building the castle in the center of their lord, to Pontguiraud allows them to assert their authority. The specifications noble property Pardailhan annexed to compoix 1670, states that "Mr. Marquis de Pardailhan Brugayroux lord, has nobly: a castle, backyard, and jasse laps, sitting in massage Pontguiraud of her false braye around the castle itself. " In 1673, the Brugairoux heirs must sell the castle and the co-lordship of Pardailhan their cousin François doors. This buys in 1676 the manorial share belonging to the king (he became lord engagist). In 1696, it is said "direct and universal land lord of the barony of Pardailhan" by the Court of Accounts of Montpellier, and it now takes the title of Baron of Pardailhan; it exerts a tyrannical authority over the people and multiplies the proceedings to obtain payment of manorial rights sometimes fallen into disuse. In this time of stately reaction, the castle became the symbol of the power of the lord, including the installation of a court of justice.From 1880, the area of Pardailhan is dismembered and sold to residents by Tissié children. The castle became a resort for Gaston Gautier large landowner from Narbonne and renowned botanist who planted conifers in the park, which he introduced in the area10. From 1908 to 1926, the castle and its wood are the property of the family Mazauric Beaulieu, descendant of Treil Pardailhan.

How To Get To Château de Pardailhan (Map):