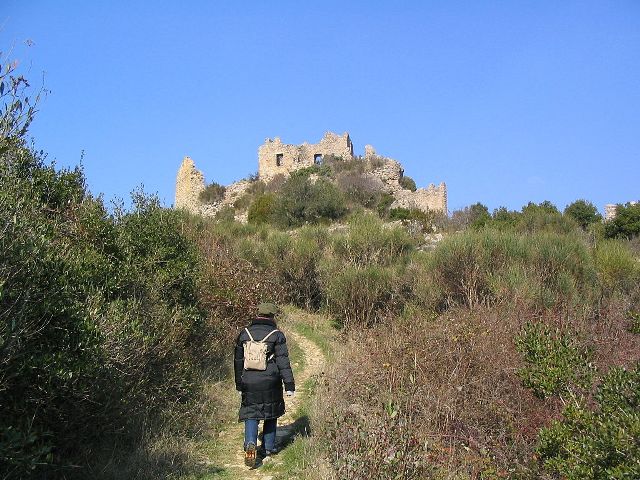 Location: Padern, in the Aude departement of France (Languedoc-Roussillon Region).
Built: 1026.
Condition: Ruins.
Ownership / Access: --
Notes: Château de Padern overlooks the village of the same name, on the main road 14 which connects to Cucugnan Tuchan, in the French department of Aude, in Languedoc-Roussillon, Midi-Pyrenees. Château de Padern enough is known in the area because he has not played a very important role during the crusade against the Albigensian, unlike its neighbors terms, Queribus or Peyrepertuse. We do not exactly know the year of its construction, but the village of Padern is quoted as 899, when King Charles III said the Simple gives the territory to the Abbey of Lagrasse, while it still belonged to the Counts Toulouse, not to the crown of France. The fortification is reported for the first time in 1026, and reported a secondary fortification (Forcia) in Padern at the end of the twelfth century, under the control of the Abbey of Lagrasse. During the Albigensian Crusade, of Barbeira Chabert, Oliver arms Terms companion, protector and lord of the Cathars Quéribus, seizes instead. After the capture of Quéribus, he negotiated his freedom against the abandonment of the citadels to King Louis IX. Abbey Lagrasse therefore recovers the castle, and in 1283, became the official owner of a transaction with the prosecutor of King Philip III of France said the Bold, it retained ownership until 1579. At the end of the sixteenth century after the wars of religion, Pierre VIC native of Catalonia (Girona) acquired the castle, makes the arrangements retaining its feudal appearance. In 1706, the descendants resell later all at the Abbey of Lagrasse that will leave everything to retire at the end of the eighteenth century.

How To Get To Château de Padern (Map):