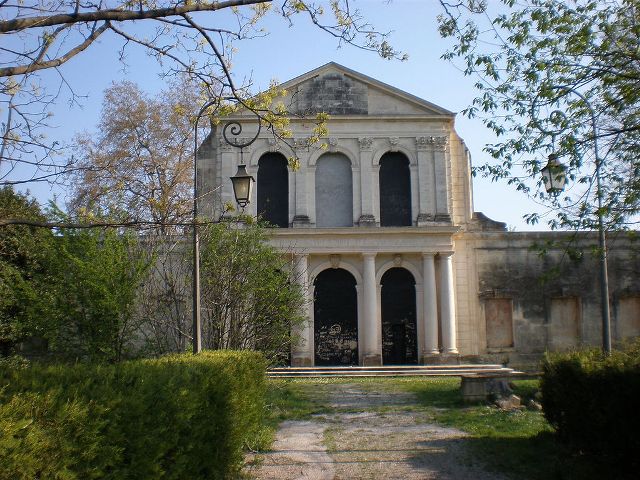 Location: Montpellier, in the Hérault departement of France (Languedoc-Roussillon Region).
Built: 1723.
Condition: In good condition.
Ownership / Access: Owned by the municipality.
ISMH Reference Number: PA00103528
Notes: Château de la Mosson (also called Bonnier de la Mosson Castle) is located on the edge of the Mosson on the border between the towns of Montpellier Juvignac. It is part of the Montpellier follies. It was built between 1723 and 1727 by Joseph Bonnier, treasurer of the States of Languedoc. After his death in 1744, his wife sold the property that will be largely dismantled. Some statues are still in place on the site, but the best pieces were scattered, especially the castle gate Engarran but also some elements of its facades at Lavérune, the Chateau d'O, and gardens Fontaine in Nimes from which the majority of the statues that are present. The remaining and very damaged statues were copied by American artist Allan McCollum, who made polyester replicas (the five allegories). They were installed in Montpellier on the Esplanade Charles de Gaulle, at the Corum, for the inauguration of the line 1 of the tramway in 2000.In full (buildings and land), the assembly formed by the area including the remains of the castle with its decor, all the sculptures and water buffet in full and the remaining parts of the common and the entire soil corresponding to the old gardens, including terraces and degrees - all bearing cadastral numbers LN 12 to 14, 16 to 20, 22, 26, 27, 32, 33, 42, 44-49 - are the subject of a classification as historical monuments since November 18, 2003.

How To Get To Château de la Mosson (Map):