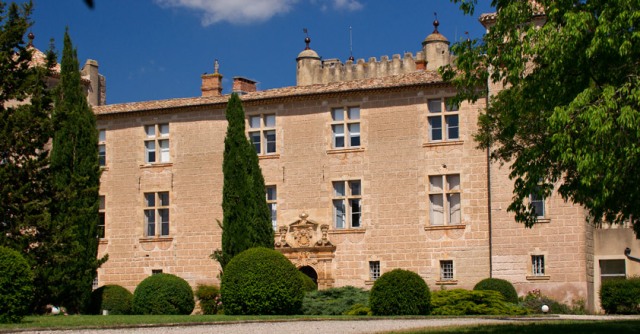 Location: Viols-en-Laval, in the Aude departement of France (Languedoc-Roussillon Region).
Built: 16th century.
Condition: In good condition.
Ownership / Access: Privately owned.
ISMH Reference Number: PA00103762
Notes: Château de Cambous is a building of Classical style of the sixteenth and seventeenth centuries, protected as historical monuments. It is located in Viols-en-Laval in the department of Herault.During the wars of religion, Antoine is a Catholic supporter Cambous more engaged. In 1584, during engagements around the castle of Montferrand, he took the fortress Protestants. This feat of arms earned him the congratulations of the king who gave him the fief of Montferrand and the reward for it.The royal generosity allows Antoine to rebuild, near his family castle of Cambous and begin to make it the center of an area that, three centuries later, will have nearly 24 km wide.The eldest son of Antoine de Cambous having no heir, the estate passes to his sister Marguerite, married to Jean Ratte, son of Gignac provost.Ratte family itself fighting the Huguenot party. Under his tutelage, Castle Cambous becomes a hotbed of Catholic activism. It was after the marriage with Larret Rigot Cambous, John Joseph Jullien of Vinezac (Joseph-Xavier Jullien uncle Vinezac) bought the castle. It will be sold to Count Louis François Vogue after her marriage to the last descendant of the branch of Vinezac Jullien: Gabrielle Jullien in the early nineteenth century. In 1889, the huge estate was bought by 600,000 francs Marie Alexandrine Elisabeth Berthier de Wagram Princess (1849-1932), wife of Stephen Guy, marquis de Turenne Aynac. The Marquise accumulating debts, it is forced, after judgment of Montpellier Civil Court December 24, 1913, at an auction. By document of 13 March 1914, MP Pierre Leroy-Beaulieu, a Norman family settled in Languedoc (Leroy-Beaulieu have, among others, the Castle of Cazilhac at Bousquet-d'Orb) goes Cambous buyer for the sum of 480,000 francs.

How To Get To Château de Cambous (Map):