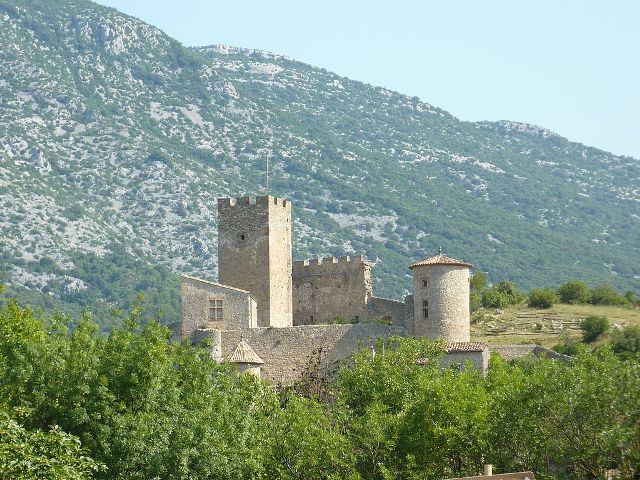 Location: Saint-Jean-de-Buèges, in the Aude departement of France (Languedoc-Roussillon Region).
Built: 12th century.
Condition: In good condition.
Ownership / Access: Owned by the town.
Notes: Château de Baulx is a fortress of the twelfth century, enlarged and rebuilt in the thirteenth and fourteenth centuries, described as overthrown in 1749. This building, which is now the subject of careful restoration, overlooking the village of Saint-Jean-de-Buèges in the department of Herault.The Lordship of Saint-Jean-de-Buèges is mentioned for the first time in 990 as a vassal of the barony of Pégairolles. The present castle appears in the twelfth century. The site is intended for monitoring of the Buèges Valley, it is primarily a watchtower. In 1280, the feudal lord of the "Castle Baulx", mentioned as such for the first time, or is Gaucelm Gaucelin of Caladon (DU GUERNY) Must tribute to Solomon and Golfried of Felguières, lords of Lunas and Pégairolles. At the same time, the defenses of the fortress were strengthened. A dry ditch is dug northeast side. A deadly breakthrough enclosure is constructed, and a tank and a store intended to support a possible seat. Caladée a ramp is performed to reach the low entrance. The lords of Berenger of Caladon retain the fortress until he entered the family Trinquère (sometimes transcribed Trinquayre or Trinquaire) by the marriage of Braidette Caladon, heir or Bringuier Bertrand Berenger Caladon, Lord of Baulx. Braidette tests February 5, 1422 in favor of his son, Raymond Trinquère, and bequeath his castle and all rights it owns. In 1680 appears a new owner, Francis Ratte, Cambous lord who erected a comfortable main building. The building is still referred to as "ruin" in 1749. It serves as a stone quarry, some houses in the village of Saint-Jean-de-Buèges still exhibit traces. In 1813 the family Turenne, then owner sells this whole ruined Hilaire Girard Lake, whose daughter and sole heiress wife in 1848 Henri Sicard. Their descendants kept the castle - converted barn - until 1987, when Joseph Sicard donated it to the town.