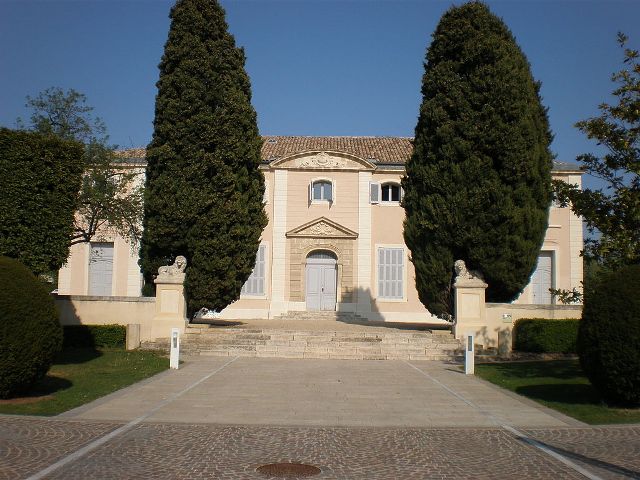 Location: Montpellier, in the Aude departement of France (Languedoc-Roussillon Region).
Built: 1744.
Condition: In good condition.
Ownership / Access: --
Notes: Château d'Alco is a madness of the first half of the eighteenth century located in 1000 rue d'Alco, northwest of Montpellier, in Hérault, opposite the General Council.The building was built in 1740 (its existence is attested in 1744) for the general farmer Antoine-Samuel Bonnier, a family of drapers converted in finance. An Atlas of the conduct of St. Clement dated 1756 shows the location of the castle and its walled grounds. The gardens, not shown on this map, are likely to post the statement is very detailed in its entirety. The new owner took the name Bonnier d'Alco. Another member of the same family who built the castle de la Mosson took the name of Bonnier de La Mosson. Castle Alco bought in January 1980 by the General Council of Hérault. It is the subject between 1985 and 1989, a comprehensive program including the construction of the Hotel Department, now situated in front of him. Today it houses reception rooms and a restaurant for advisors. Its gardens are accessible to the public.Nearly as monumental as other Montpellier follies, the castle appears as a small country residence of the Louis XV. Originally, the courtyard was announced by two entrance pavilions, surrounded by extensive common for the vineyard, now extinct. A wide flight of steps surrounding the building of modest dimensions. Coaching to vigorous cross walls of the front door only seems more imposing. A fake narrow front building, crowned with a pediment flattened arch, animates the facade. The gardens are spread in a symmetrical axis, two horizontal planes connected by a double flight staircase, with ponds and fountains. They now dominate an urban environment, where houses and buildings have replaced vineyards. This was not the case in 1937, when the writer Leander Vaillat noted: "Alco appears to have been particularly studied due to its hillside location. This is especially true for me and I think the time to reach beyond the natural sustainability is how the volume of the chateau account on the hill, when considered from the valley, and as one whose roof pink tiles and plaster were studied for the Languedoc light. " In 1993, the National Office of Historic Monuments and Sites noted in his review historical monuments the "rampage" of the urban surroundings of the castle of Alco.

How To Get To Château d'Alco (Map):