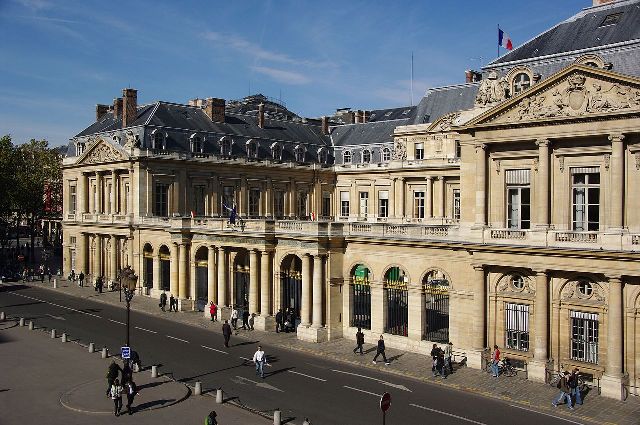 Location: Paris, in the Paris departement of France (Ile-de-France Region).
Built: 1741-1921.
Condition: In good condition.
Ownership / Access: Now houses the State Council.
Notes: Palais-Royal monumental (palaces, gardens, galleries, theater) north of the Louvre palace in the 1st arrondissement of Paris, is a high place of the history of France and Paris life. Built by Richelieu in 1628, the Palais Cardinal, bequeathed to the king in 1642, is the residence of Louis XIV child during the troubles of the Fronde and became the Palais Royal. Given prerogative to Philippe d'Orléans in 1692, he became the palace of Orleans. The Regent resides there. The future Philippe Equality will realize in 1780 a grand estate operation led by the architect Victor Louis, framing the garden of uniform buildings and galleries that will become for half a century, their cafes, restaurants, game parlors and other entertainment, go to fashion an elegant Parisian society and often libertine. The closure of the gambling houses will end it in 1836. Returned to Orleans in 1814, made available to King Jerome during the Second Empire, he was assigned from 1871 to different administrations of the republic. Today it houses the State Council, the Constitutional Council and the Ministry of Culture. The show has always been present in the Palais Royal. Richelieu had his theater. Molière took the room in 1660. At his death, Lully opera installed there will be fire in 1781. The modern history of the Comédie-French there began in 1799. The Montansier theater opened in 1790 and became the Royal Palace Theatre favors he said the theater boulevard. The last major Palais Royal date is the installation in 1986 of Les Deux Plateaux by Daniel Buren in the courtyard.Richelieu in 1624 bought the Hotel de Rambouillet which for him the double advantage of being close to the Louvre and be bordered by a fragment of the wall of Charles V, which may, if it is demolished, provide ample space in the city behind the hotel. This will be the case in 1633, a royal patent giving it ownership of the land. He then undertook, by appealing to the architect Jacques Lemercier, transforming the hotel into a real palace with lavish apartments and a theater that will long remain the most beautiful of Paris. Sauval1 left specific testimony about the Hall of Illustrious Men of the Palais Cardinal, which included, accompanied by four statues and thirty-eight busts of ancient marbles, twenty-five portraits (including that of Louis XIII and his) painted by Philippe de Champaigne and Simon Vouet. It remains today the Palais Cardinal fire in 1763 that the gallery Proues, decorated with motifs of rostrums and sea anchors, recalling charge Superintendent of Cardinal Navigation.

How To Get To Palais-Royal (Map):