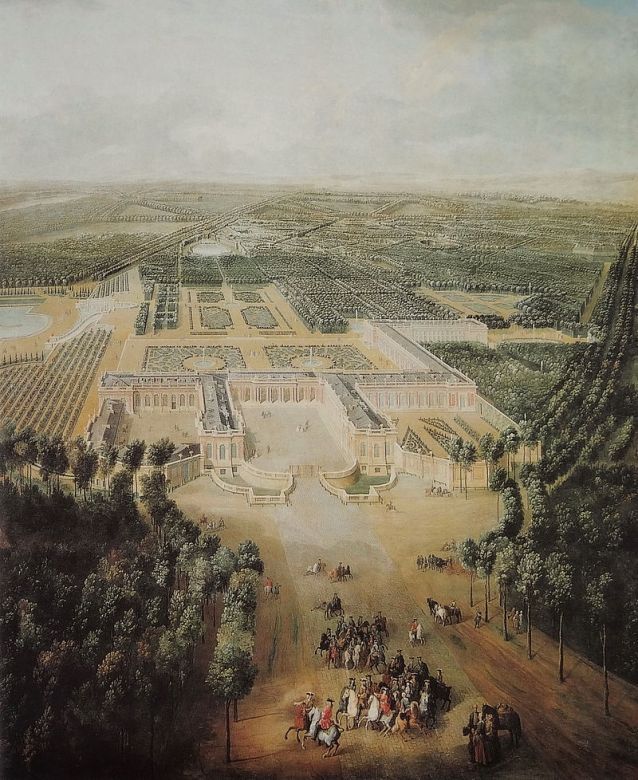 Location: Versailles, in the Yvelines departement of France (Ile-de-France Region).
Built: 16th century.
Condition: Ruined.
Ownership / Access: --
Notes: Grand Trianon or marble Trianon is a palace that Louis XIV built in 1687 by Jules Hardouin-Mansard near Versailles in France, in the castle Versailles the park. The exterior of the building is built in pink marble which gives it the name "marble Trianon", as opposed to porcelain Trianon that preceded the same location.The Grand Trianon is composed of a courtyard of a palace, and a set of gardens and ponds: it has at its entrance a large courtyard called the Cour d'Honneur, framed by a building divided into two connected wings gallery by a column named "peristyle". The right wing is extended by a wing perpendicular called Trianon-sous-Bois. The building overlooks a set of French gardens and pools, the bottom dish basin, the basin-called "ears" and the basin of the Fer-à-horse. It was the place of residence or stay of several French and foreign royal figures, including Louis XIV, Peter I of Russia or Leszczyńska Marie, wife of Louis XV. More recently there have stayed de Gaulle, or foreign heads of state on official visit to France as US President Richard Nixon in 1969, or the Queen of the United Kingdom Elizabeth II in 1972. Ranked with the Palace of Versailles and its dependencies as historical monuments by the list of 1862, by order of 31 October 1906, it is also a World Heritage by UNESCO in 1979. The set is open today public in the National museum of the castles of Versailles and Trianon.In 1663 and 1665, Louis XIV bought the monks of the abbey of Sainte-Geneviève Paris lands and the village of Trianon (named Triarnum in a bubble 1163), the progressive enlargements of the area northwest of the park Versailles, eventually enclave. The church and the buildings are razed and a first garden is quickly drawn. Two years later, in 1670, the king asks Louis Le Vau's plans of a small castle for its exclusive use. Le Vau, who died Oct. 11 of that year, leaves a project that is completed by his son and successor François D'orbay. Completed in 1672 (less than a year), the first castle of Trianon, called "Porcelain Trianon", will remain fifteen. Tiled very fragile, it quickly undergoes the test of time and continues to please the king who ordered its demolition in 1686, shortly after the visit of the ambassadors of the King of Siam, to build in its place a more spacious home and a different style.

How To Get To Grand Trianon (Map):