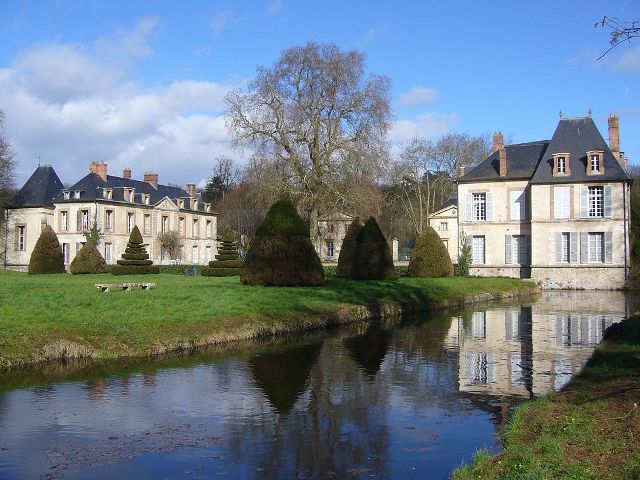 Location: Ballancourt-sur-Essonne, in the Essonne departement of France (Ile-de-France Region).
Built: 1620.
Condition: In good condition.
Ownership / Access: Privately owned.
ISMH Reference Number: PA00087811
Notes: Château du Saussay is a French château located in the French town of Ballancourt-sur-Essonne, in the former province of Hurepoix, today department of Essonne and the region Île-de-France, to thirty-seven km south of Paris.Property of Olivier le Daim, barber to Louis XI in the fifteenth century, the castle was burned by the Spaniards in 1592 during the religious wars. The owner of Henri IV obtained by letters patent, permission to surround the water castle rebuilt it in the style of Louis XIII (brick and stone). Property me Gaumont, parliamentary, he was sent by women to families BRAGELONGNE, Canclaux Colbert and finally in the early nineteenth century. In 1735, a house was built in vis-à-vis those which already existed and the same. Thus the castle took its present form of two castles facing and opening onto a park. Just before the Revolution the entrance building and the drawbridge were cut down and replaced by two elegant pavilions in the style of the architect Claude Nicolas Ledoux (late eighteenth century). In the nineteenth century, Colbert doubled its width in the main lodge and endowed the castle with a magnificent library. In the early twentieth century, the castle passed to the family of Bourbon Busset, and the park was redesigned by the great landscape designer Achille Duchêne who knew there combine the charm of the English parks and classical harmony of the French gardens. This park consists from three perspectives has many ponds, lawns framed topiary or planted with rare species. The academician Jacques de Bourbon Busset lived in this castle where today live her children, grandchildren and great-grandchildren. January 19, 1951, the castle was partially registered under historiques1 monuments. Shootings: many films and TV movies have been filmed in this location include: "A life," a French TV movie Elizabeth Rappeneau based on the novel by Guy de Maupassant broadcast on FR3 in 2004.