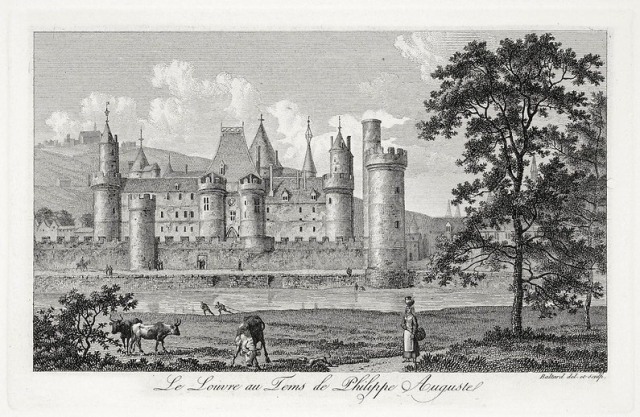 Location: Passy, in the Paris departement of France (Ile-de-France Region).
Built: 1190.
Condition: --
Ownership / Access: --
Notes: Château du Louvre of the Louvre was a fortress built by King Philip Augustus to strengthen the walls he had built around Paris to protect the city. It was demolished in stages to make room in the Palais du Louvre.Before leaving for the Third Crusade in 1190, Philippe Auguste Paris wants to protect its capital, in particular vis-à-vis the English, with whom he has long been in conflict. He also wants to have a safe place for his treasure, as well as his archive he had lost the battle of Fréteval in 1194 against Richard the Lion Heart and had been reconstituted. He built the walls of the same name around Paris. From 1190 to 1209 on the right bank, from 1200 to 1215 on the least exposed left bank. The castle of the Louvre is located in the west, the most exposed side because the English occupy the Normandy within 100 km. It is also downstream of the Seine arose the Norman invasion of 845 that failed to capture the city. The castle consists of an approximately square fortress (78 mx 72 m), surrounded by a ditch about ten meters wide, powered by water from the nearby Seine. The wall on the west side, overlooking the countryside and found the most exposed, is thicker and no door. The perimeter is reinforced with ten defense towers, especially the corners. There are two doors, the main south and a smaller east. They are protected by a drawbridge and flanked by two twin towers. Two buildings housing the garrisons and arsenals are joined outside wall, west and south of the central courtyard. The towers are not far from more than 25 m, distance corresponding to the effective range of a bow. They are pierced with loopholes for single splay to ensure coverage of the walls.