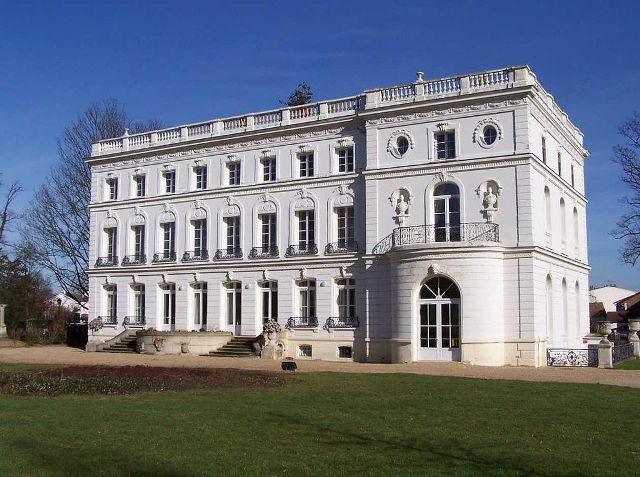 Location: Buc, in the Yvelines departement of France (Ile-de-France Region).
Built: 1864-1866.
Condition: In good condition.
Ownership / Access: --
Notes: Château du Haut-Buc is located in Buc, in Yvelines, France.Attached to the royal bailiwick in the late seventeenth century and located in the large park of Versailles at the time, the Haut-Buc served including Louis XIV, then King of France, to house his natural son and the Count of Toulouse Duke of Penthièvre, Louis Alexandre de Bourbon he had Madame de Montespan, and thus evade the eyes of the court before he was legitimized in 1681. In 1740, the castle was destroyed by order of Louis XV but another building was erected on the site between 1864 and 1866. This new castle was built for Leon Thomas, rich Parisian bourgeois, before being purchased in 1893 by Christmas Bardac . Sold in 1918 to Gentilli di Giuseppe, passionate astronomer will install even in the gardens a giant telescope in 1922. He left the castle in 1929 and the estate was acquired by an American couple, Mac Cune. The state bought the property in 1954 and used as a school building. The town meanwhile, does appropriates in 1988 and renovated in 2000. The Franco-German High School Buc, who left the premises of the Lycée Hoche in Versailles for the new site in the fall of 1981, was built on part of the field.

How To Get To Château du Haut-Buc (Map):