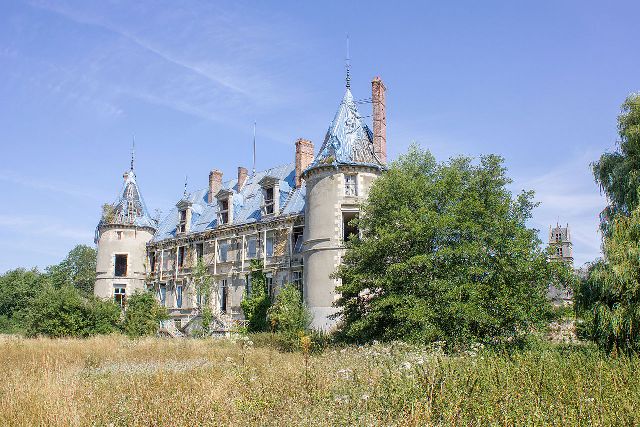 Location: Fontenay-Trésigny, in the Seine-et-Marne departement of France (Ile-de-France Region).
Built: 17th century.
Condition: In good condition.
Ownership / Access: Privately owned.
ISMH Reference Number: PA00087006
Notes: Château du duc d'Épernon of the Duke of Épernon is a castle located in Fontenay-Tresigny in Seine-et-Marne, in Brie, 43 km southeast of Paris. It is located on the Breon, opposite the Church of St. Martin in the heart of the old walled city once. The history of the city is closely linked to that of the castle. The squires were lords of Fontenay in Brie during the old regime.The castle is a historical monument since October 7, 1963, and the park is contained in pre-inventory of remarkable gardens.The architecture of the castle is marked different eras when it was rebuilt after falling more or less in ruins, with different styles.The medieval castle rebuilt by Jean Mercier after 1389 was enclosed by walls and moats around a courtyard, with two drawbridges, north facing the church and the south. The current building has retained the rectangular flanked by round towers. William Prudhomme undertook to rebuild the castle after 1538. The castle itself duke of Epernon said date for the first half of the seventeenth century, the castle built by Jean de Nogaret of Valetta, became a pleasure palace. The apartments are comfortable, decorated with tapestries and paintings. The ground floor and the guard room are covered with large glazed tiles. The castle was then incorporated in the walled city. A French garden was on either side of the castle to the north and south. A canal was fed by Breon, with two arms extending staves arranged geometrically, the eastern branch was the longest joined a pool downstream of the farm Sourdeau. A large fenced park crossed by bridle paths lay to the south. A long north-south perspective started from the walled city, passing by the castle and its gardens and through the park. The castle will not undergo major changes before the end of the eighteenth century and early nineteenth century. The Marquis de Gontaut-Biron, owner in 1837, it restored the body, the main building, the side body and the two subsequent rounds, but to open the courtyard, he pulled down the input body with its turrets, a drawbridge, and corner towers that housed the Gothic chapel and the prison. The gardens and the old farm are landscaped leisure park. The facades and roofs and the room decorated with painted paneling on the ground floor are classified as historical monuments by order of 7 October 1963. The buildings common including the loft on three levels over the soil and moat are registered as historical monuments by order of 17 October 1991.