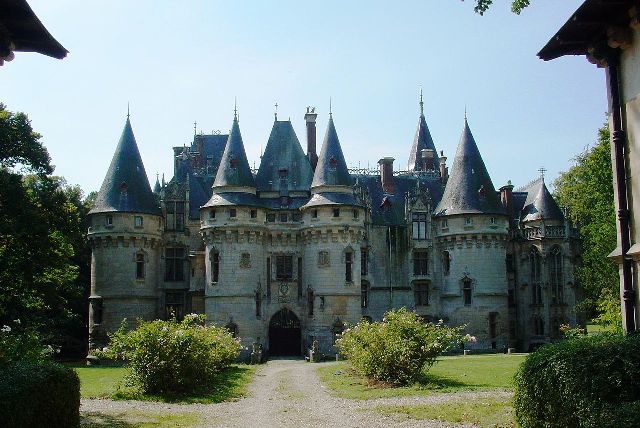 Location: Vigny, in the Val-d'Oise departement of France (Ile-de-France Region).
Built: 1504-1880.
Condition: In good condition.
Ownership / Access: --
ISMH Reference Number: PA00080229
Notes: Château de Vigny is a French castle, located in the town of Vigny (Val-d'Oise). It was built from 1504 and rebuilt in 1867 in the troubadour style. The castle was registered historic monument by decree of December 28, 1984.In 1504, Cardinal Georges d'Amboise bought the lordship of Vigny and ordered the building of a new castle on the site of the old manor house. After the cardinal's death in 1510, his nephew and successor George II of Amboise continues his work. Surrounded by a moat turned into part of wider water in the nineteenth century, the castle has a remarkable composition north facade with its entrance pavilion confined by two flanking towers themselves responding to two corner towers. The curtains connecting these towers are wide open with bays with mullions. Battlements surround everything and come to support roofs and hilltops snuffbox. This concern for symmetry and scheduling is typical of the first French Renaissance. In 1555, the mighty Constable Anne de Montmorency is acquiring the manor and castle. Above a portal tierspoint flanked by two towers, its coat of arms and motto of Montmorency, Aplanos remains visible. More than a century later, Henri de Lévis, 3rd Duke of Ventadour, becomes the new owner. In 1694, the estate passes to the house of Rohan. In the mid-nineteenth century, the building is threatened with ruin. It was bought November 8, 1867 by Count Spyridon Vitali Philip, Prince of Sant'Eusebio, who had restored in a style idealizing too regular to Viollet-le-Duc. The northern façade oriented towards the village evokes from an architectural pastiche. Count Vitali is also enlarge the south wing by the architect Charles Cazot in a Gothic Revival style dear to the nineteenth century. The large square tower and chapel were built in 1888. The castle was registered historic monument by decree of December 28, 1984. This registration covers all the buildings of the area of ​​the castle, namely the castle itself; the two bridges over the moat; the two entrance pavilions facing the village; southeast entrance pavilions and northwest; Manor told The County; Castle Farm; common; stables ; orangery; and two greenhouses. Some of these buildings is visible from the public domain. Common and stables and other buildings near Beaudoin Street north threaten ruin today, and restoration of the County Manor has stopped there for many years. The park of the castle is no longer maintained as the immediate surroundings of the castle; visible paths from the different access gates are disappearing under vegetation. Only the castle and the farm (outside the area) receive regular maintenance. The castle is especially famous for being the setting for the video for Rihanna Te Amo, along with Laetitia Casta. But the castle is best known amateur film enthusiasts thrillers parodic "French" because in the 1960s, most of the interior and exterior scenes of the film The Barbouzes (with Lino Ventura, Mireille Darc, Francis Blanche and Jesse Hahn) y were shot.

How To Get To Château de Vigny (Map):