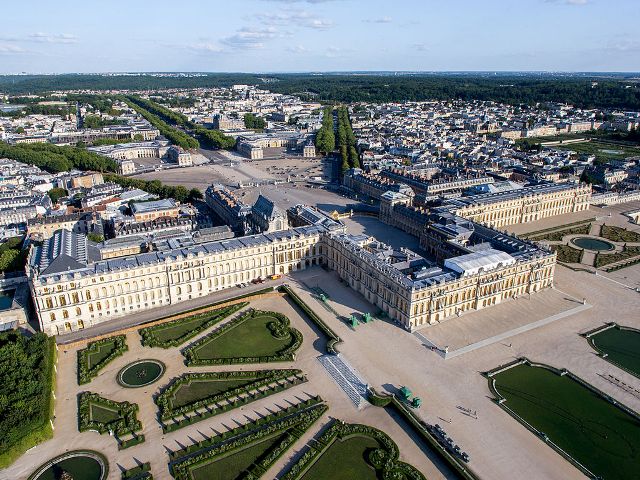 Location: Versailles, in the Yvelines departement of France (Ile-de-France Region).
Built: 17th-18th century.
Condition: In good condition.
Ownership / Access: State property.
ISMH Reference Number: PA00087673
Notes: Château de Versailles is a castle and a French historical monument which is located in Versailles, near Paris, France. It was the residence of the kings of France, Louis XIV, Louis XV and Louis XVI. The king and the court resided there permanently from 6 May 1682 to 6 October 1789, with the exception of the years of the Regency of 1715-1723. Bust of Louis XIV by Gian Lorenzo Bernini in the castle of Versailles. Located southwest of Paris, the castle and grounds were intended to glorify the French monarchy. The castle consists of a succession of elements of architectural harmony. It is spread over 63,154 m², divided into 2300 parts, which, currently, 1000 museum pieces. The Versailles castle park covers 815 ha, against approximately 8000 ha françaisenote before the Revolution, of which 93 hectares of gardens. It includes many elements, including the Petit and Grand Trianon (who was also residence of Napoleon I, Louis XVIII, Charles X, Louis-Philippe I, and Napoleon III), the hamlet of the Queen, the Grand and Petit Canal a menagerie (now destroyed), an orangery and the water part of the Swiss. The Palace of Versailles is located northwest of the territory of the municipality of Versailles on the Place d'Armes, 16 kilometers southwest of Paris, France. Is meant by "Versailles", both the palace building and its nearby approaches, as well as the entire field of Versailles, while including - among others - the Trianons, the Grand Canal and the Versailles castle park.

How To Get To Château de Versailles (Map):