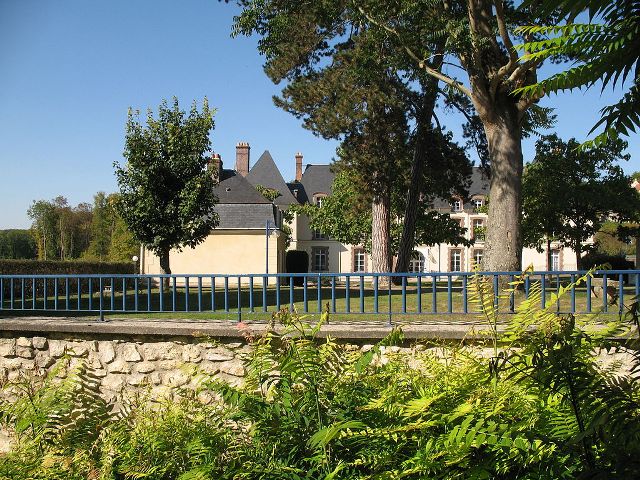 Location: Septeuil, in the Yvelines departement of France (Ile-de-France Region).
Built: 18th century.
Condition: In good condition.
Ownership / Access: Private property.
Notes: Château de Septeuil is located in the town of the town of Septeuil, in Yvelines department. The park is crossed by the ru Flexanville.In the Middle Ages, there was already a castle located behind the church. The construction of the current castle dates back to the eighteenth century. A courtyard before a building flanked by two pavilions. One of these, a circular shape is sometimes called music rotunda. In the twentieth century, the development of the nursing home causes profound changes and the disappearance of many original features, including a wrought iron gate and the moat surrounding the castle and a staircase that was built to be able to ride . The wooded park and gardens, past the castle, were designed by Le Nôtre. The park's area from 26 hectares, originally, to 17 hectares today.In the eighteenth century, the castle belongs to Charles Louis de Bourbon, Count of Eu, grand-son of Louis XIV. In 1773, it sells its properties to Louis XV, but the death of the king, the transaction is canceled by Louis XVI. In 1775, the death of the Count of Eu, the property returns to his cousin, Louis Jean Marie de Bourbon, Duke of Penthièvre.In 1776, Mr. Crab, King's Advisor, acquired the castle. His son, Louis-Hippolyte Achille meal Septeuil, Berthier's aide and supports Lannes dying at the Battle of Essling. He will lose a leg in the war with Spain. He died at the castle of Septeuil in 1841, ten years after his wife, Pauline Constance Le Roy Zoe Mondreville friend of Pauline Bonaparte and widow of outrageous Paulin Barral, lord chamberlain of Allevard and Jerome Bonaparte, King of Westphalia. He received his castle the Duchesse d'Angouleme and the Duke of Berry.In 1927, we installed a sanatorium and a "cure air and rest." In 1955, the property is converted into a retirement home. In late 2005, the residence is divided into two: an accommodation facility for elderly dependents and a foster home medicalized.