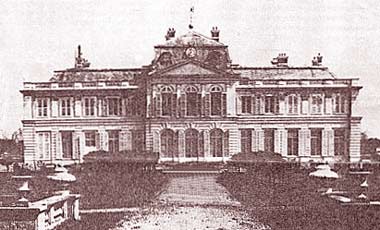 Location: Évry, in the Essonne departement of France (Ile-de-France Region).
Built: 1716- 1756.
Condition: Ruins.
Ownership / Access: --
Notes: Château de Petit-Bourg was a French castle residential castle located in Evry-sur-Seine in Hurepoix countries, on the left bank of the Seine, in the present department of Essonne and the region Ile-de Current La France.The first castle known on the Petit-Bourg site overlooking the Seine, to the forest of Senart, was started in the early seventeenth century to André Courtin, canon of Notre-Dame de Paris and completed around 1635 for Jean Galland. Around 1650, Bishop Louis Barbier († 1670), bishop of Langres, had him decorate gardens designed by François Mansart. Mansart would have worked around 1662. 1695, Madame de Montespan acquired the Château de Petit-Bourg. She did make major development works and instructed André Le Nôtre to design gardens in the French, stepped terraces. She took refuge there after his disgrace. At his death in 1707, his son the Duke of Antin, inherited the castle and made remake gardens. Between 1716 and 1722 he undertook to do completely rebuilt by architect Pierre Cailleteau said Lassurance. The new castle of Petit-Bourg was a truly princely residence masterpiece Lassurance. The best designers of the time worked there. It particularly noted the firm gallery of the King's apartment (corner flag noon, upstairs) and the large living room, decorated by François-Antoine Vasse portraits of royal and ducal emblems.Before reconstruction of the castle, the Duke d'Antin received in Petit-Bourg Louis XIV and, in 1717, Czar Peter the Great. After its reconstruction, Louis XV and Queen Marie Leszczyńska made frequent visits there. Madame de Pompadour saw his land Etiolles before being elevated by royal favor, and dreamed of this magnificent home. After the death of the Duke of Antin, the castle survived, unfurnished, for several years. Acquired by Marie Jacomel, widow of Louis Chauvelin, president mortar parliament of Paris, he was completely demolished in 1750 and replaced by a new castle built from 1756 in neo-classical style, designed by architect Jean-Michel Chevotet. At the time of the Revolution, the castle was owned by the Duchess of Bourbon, born Bathilde d'Orléans. After passing through several hands, it was acquired in 1827 by the banker Alexandre Aguado, Marquis de Las Marismas, who welcomed them his friend, the composer Gioachino Rossini, who composed partly his opera William Tell in the summer of 1828 and had himself elected mayor of Evry-sur-Seine in 1831. the creation of the Paris railway Corbeil came unfortunately cut the park in two and separating the Seine. Alexandre Aguado sold his property April 7, 1840 to speculators who undertook to divide the field. The Germans occupied the castle during World War II, and burned it in 1944, when they left Evry. The ruins were razed. At the site of the castle was built the residence of the "Park of Petit-Bourg". The driveway lined with chestnut and lime trees along the pavilions of the residence was the avenue of honor of the castle.